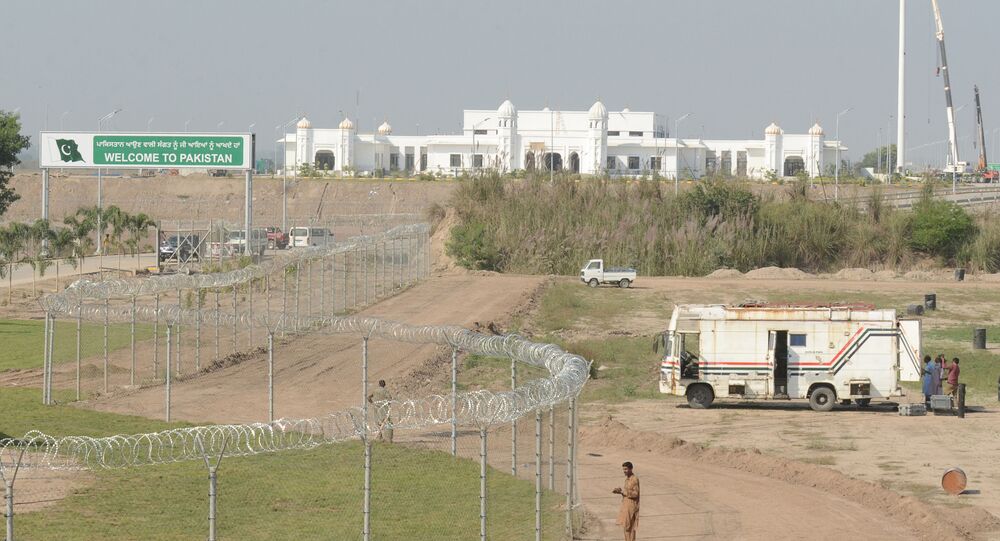 New Delhi (Sputnik): The two South Asian neighbours, India and Pakistan, have been locking horns over the Kartupur corridor ever since its announcement. The religious corridor was opened on the 150th birthday of Sikh founder Guru Nanak, allowing access to Sikh pilgrims from India to the holy shrine in Pakistan's Punjab Province.

Indians, including members of the Sikh community, were outraged over the statement on the Kartarpur corridor by Pakistan’s railway minister Sheikh Rashid on Saturday (30 November).

Rashid said the historic Kartarpur corridor was the brainchild of Pakistan Army chief General Qamar Javed Bajwa and it will hurt India forever. The statement contradicted an earlier one by the Pakistani government asserting Kartarpur to be the initiative of Prime Minister Imran Khan.

The statement was soon hit by a number of angry responses.

State Chief of Punjab Amarinder Singh said that Rashid's comment has exposed their nefarious intentions and warned that "any misadventure will be met with retaliation of the kind they won’t survive".

As a Sikh, I am happy at the opening of the #KartarpurCorridor. However, Pak Minister’s disclosure that #KartarpurCorridor is the brainchild of @AsimBajwaISPR has exposed their nefarious intentions. Any misadventure will be met with retaliation of the kind they won’t survive. pic.twitter.com/tCs4S9SCtV

Manjinder Singh Sirsa, a politician and chief of the Delhi-based Sikh Shrine organisation, strongly condemned Pakistan in a series of tweets for “exploiting the holiest land Sri Kartarpur Sahib & Sikh sentiments” and said that “Sikhs have been backstabbed by Pak”.

God forbid this should ever be true!
This statement of @ShkhRasheed means that Sikhs have been backstabbed by Pak, once again

And if Rashid’s statement is just a brag, PM Imran Khan should take strict action against his motormouth Minister for hurting Sikh faith with his insensitivity@TimesNow @ANI @republic https://t.co/R6bncKDtri

Others also echoed these sentiments and said Pakistan has been exposed by contradicting its earlier statement in which it claimed Kartarpur to be a good faith initiative by Imran Khan.

Pak Minister @ShkhRasheed says Kartarpur Corridor is a wound inflicted on India by Gen Bajwa...a wound that India will never forget.
Has Sheikh Rasheed been paid off by RAW? Why is he humiliating Pak Army & it’s Chief publicly?
Pak doesn’t need enemies. It has this pumpkin 👇 pic.twitter.com/PpIiIj3M8w

We All Knew it that the Kartarpur Corridor was a Trap Laid By The Pakistan Army Chief. Now The Pakistani Minister Sheikh Rasheed Ahmad Confirms it with His Own Mouth! https://t.co/M3H9wh0Hth @narendramodi @AmitShah @PMOIndia

Gen Bajwa is in for a rude shock if mischief is on his mind.....Lions have tasted blood now.....we want Nankana Saab, Panja Saab, and many more right upto NWFP..... obviously corridor cannot be created till there....hence we may be tempted to take over the entire Pak.....

Religious issues to the hands of Pakistanis & khalistanis backed by Pakistan. Until the end the world, they'll use it to incite sikh religious sentiments & portray India, the government as villains. That's how it works. India should not stop kartarpur. The government played well

The inauguration of the Kartarpur corridor on 9 November was in doubt after the two nations downgraded their diplomatic ties following New Delhi’s decision to revoke Jammu and Kashmir's special status and bifurcate it into two union territories on 5 August.