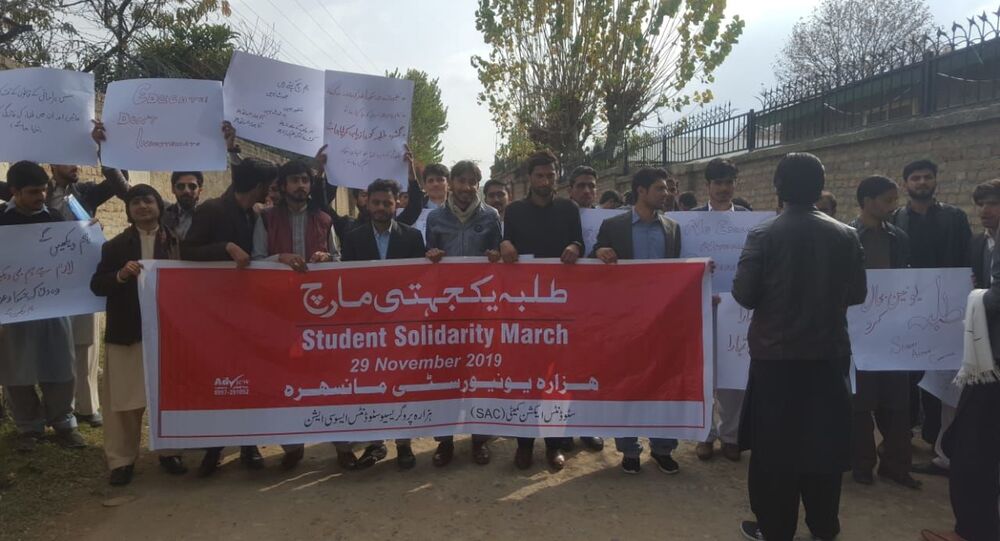 New Delhi (Sputnik): Student organisations in Pakistan had organised a countrywide student march on Friday to demand the revocation of a 35-year ban on student unions in colleges and university campuses.

A day after the Students Solidarity March in Pakistan on Saturday, student activist Alamgir Wazir from the Punjab University in Punjab Province’s Lahore has gone missing.

A gender studies’ student, Wazir came into the limelight due to his “fierce” speech at the march. A video of his speech has gone viral on social media. He says in the video: “We are asking for education, justice, and roads but they are giving us guns".

​Students from Punjab University have been protesting outside the vice chancellor’s office since Wazir went missing, demanding his release. They are saying he has been arrested for chanting slogans against the authorities.

Alamgeer Wazir has gone missing. Pashtun, Baloch, Sindhi and Punjabi council's sit in for an immediate release of Alamgeer Wazir is still in progress. All the progressive students of lahore are requested that kindly join. #PunjabUniversityLahore#ReleaseAlamgirWazir pic.twitter.com/G5UY6mEq74

​Wazir has reportedly been vocal about racial discrimination against Pashtuns. Pashtuns are predominantly an Eastern Iranian people, who use Pashto as their first language, and live in Afghanistan and Pakistan.

Netizens are condemning the “abduction” of the student leader for voicing his opinion against the regime. #ReleaseAlamgirWazir is also trending on Twitter, demanding the student’s release.

When our university students is not secure and they were always threaten and abducted by unknown when they express their views to others .Your act will be ended soon.stop pashtun genocide #ReleaseAlamgirwazir pic.twitter.com/bnUP04yeNJ

Alamgir Wazir, who was took part in #StudentsSolidarityMarch yesterday, arrested in Punjab University. Awaring others about the slaughter of Pashtuns,barbarism going on with them and the human right violation in Pashtun land hv become a crime, & he did these#ReleaseAlamgirWazir pic.twitter.com/ayGarygwpD

We demand the immediate release of Alamgeer wazir.. He was chairman of Pashtoon educational development movement #PEDM and was studying gender studies in PU.. He has been missing today from university premises.#Releasealamgirwazir pic.twitter.com/xCFtYOS1kp

​Wazir is the nephew of Pakistani politician Ali Wazir from the South Waziristan District in the Khyber Pakhtunkhwa Province of Pakistan.