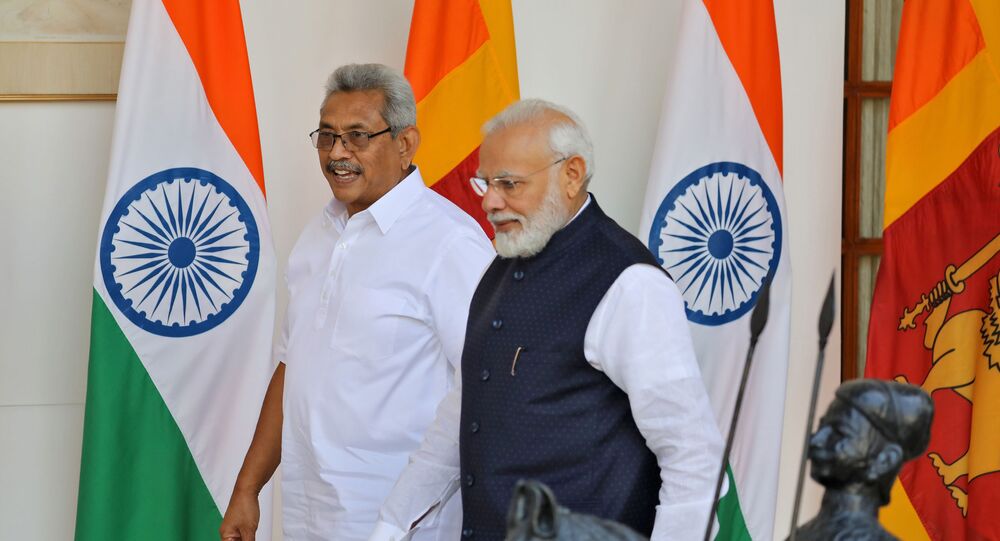 New Delhi (Sputnik): India has responded positively to a request by one of its largest trading partners in South Asia, Sri Lanka, for economic assistance and counter-terrorism efforts, as well as intelligence cooperation during delegation-level talks held in New Delhi.

Giving a major boost to bilateral ties with Sri Lanka, India on Friday offered two lines of credit worth over $450 million to enhance the efficiency of Colombo’s counter-terrorism security set-up and give a stimulus to its economy.

Indian Prime Minister Narendra Modi announced the offer through an opening statement delivered after talks with visiting Sri Lankan President Gotabaya Rajapaksa, who is in New Delhi on his first state visit after winning the presidential election earlier this month.

“The security and development of our two countries is inseparable. Therefore, it is only natural that we remain mindful of each other’s security and sensitivities. We have taken a decision that we will together further strengthen the all-round partnership and cooperation between both countries", Prime Minister Modi said.

Assuring President Rajpaksa of India’s commitment to be a partner in Sri Lanka’s development, he revealed a new line of credit of $400 million will help further strengthen Sri Lanka’s infrastructure and development. “I am sure that apart from benefitting Sri Lanka’s economy, this line of credit will also give an impetus to mutually beneficial project cooperation".

Re-emphasising New Delhi’s consistent opposition to terrorism and extremism in all its forms and recalling the horror of the Easter Sunday bombings in April this year in Sri Lanka, Prime Minister Modi again expressed India’s unwavering support to its neighbour Sri Lanka in the latter's fight against terrorists and extremists.

“In order to further strengthen our mutual security as well as our cooperation for the fight against terrorism, I discussed in detail with President Rajapaksa the different ways we can implement it… I am happy to announce a special Line of Credit of $50 million to Sri Lanka to combat terrorism", Modi said.

Acknowledging India’s timely offer of lines of credit, President Rajapaksa said: “India has always assisted Sri Lanka to enhance our capabilities in intelligence and counter-terrorism and we look forward to receiving this continued support".

Colombo has had to rethink and rework its national security strategies and appreciates New Delhi’s cooperation and assistance in this regard, he stated further.

“Sri Lanka’s cooperation with India is multifaceted with priority given to security-related matters, while with other countries the initiatives for cooperation are by and large economic and commercial. Sri Lanka will continue to work closely with India to ensure that the Indian Ocean remains a zone of peace", President Rajapaksa said.

Bilateral ties between India and Sri Lanka have been marked by close contacts at all levels, including political, economic, defence, security, intellectual, cultural, religious, and linguistic.

India sees and accepts Sri Lanka as its closest maritime neighbour and a trusted friend. As part of its “Neighbourhood First” policy, New Delhi has prioritised security and economic cooperation with Colombo.