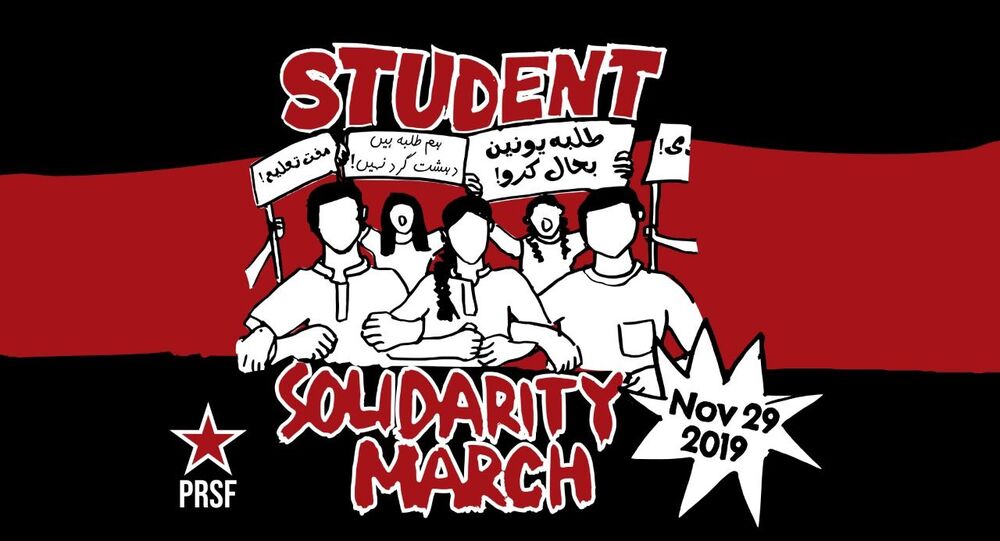 New Delhi (Sputnik): Student unions and campus politics were outlawed in Pakistan in 1984 by former president General Zia-ul-Haq, and now, 35 years later, students are protesting against the ban.

Students in Pakistan are set to hold a Students’ Solidarity March across 40 cities on 29 November to reclaim the right to practice diplomacy, debate, politics and leadership.

Students from Karachi, pls gather at Regal Chowk on Friday at 3pm for the #StudentsSolidarityMarch. You wanna know what the demands are? Here you go. Is there something you disagree with? If not, why not raise voice for your own rights? For the future of this country? pic.twitter.com/KFefhhNJO2

Some 20 student organisations from across Pakistan have come together to question the administration in their respective universities and colleges with this march, according to Arooj Aurganzeb, member of Progressive Students’ Collective from Lahore city of Punjab province in Pakistan.

Arooj, who has become a symbol of student protests in Pakistan after a video of her sloganeering in the run up to the march went viral, says:

“We (members of student organisations) met earlier in November and decided to raise the issues of absence of student unions in universities and colleges in an organised manner.”

​Talking about the need for student unions in education institutes, the graduate who is facing allegations of being a foreign agent, says: “It all started in 2016 when students of hostels in Punjab University, Lahore, started questioning the university authorities about the unavailability of basic facilities such as clean water and healthy food. But following this, authorities started kicking students out, eventually leading to the formation of the student group.”

It is a similar story in every other university and college in different parts of the country where student organisations have come into existence due to the lack of proper facilities on campuses.

“Tomorrow, everyone who feels that the education institutes need to be more liberal and students should be able to question authorities, will come out for the march in all the 40 cities. When students are not given a chance to debate and discuss, how will they understand politics? They need experiential knowledge of decision-making and it will come with formation of student unions,” Arooj says.

#StudentsSolidarityMarch is trending on Twitter with members of civil society sharing videos in support of the students’ march.

After banning student groups in Balochistan, today we received news that one of our main organizers' degree has been cancelled by Punjab University.@HUSNAINJAMEEL is an Mphil student in Political Science & is working fearlessly for students' rights. Targeting him is proof that pic.twitter.com/TlBOciFIYH

Thank you @LegalPolitical (Asad Jamal) for your support for the #StudentsSolidarityMarch.

We call upon lawyers, teachers, doctors and members of civil society to express solidarity with the students & join their march.

Together we will win! pic.twitter.com/pndHiow1vG

According to Lahore Left Front activist Nasir Iqbal, tomorrow's march will mark a beginning of a larger movement in Pakistan for better education.

Arooj shares Nasir's view: “This is a first step. Now there is a discussion about something that people were otherwise scared to even question about. This is our first success, following this is a long way to achieve our goal."

The government has taken action against the protestors. On 26 November, the federal government wrote to the University of Balochistan to ban political activities on the university campus, while Punjab University cancelled the degree of one of the main organisers of the solidarity march Husnain Jamil Faridi.