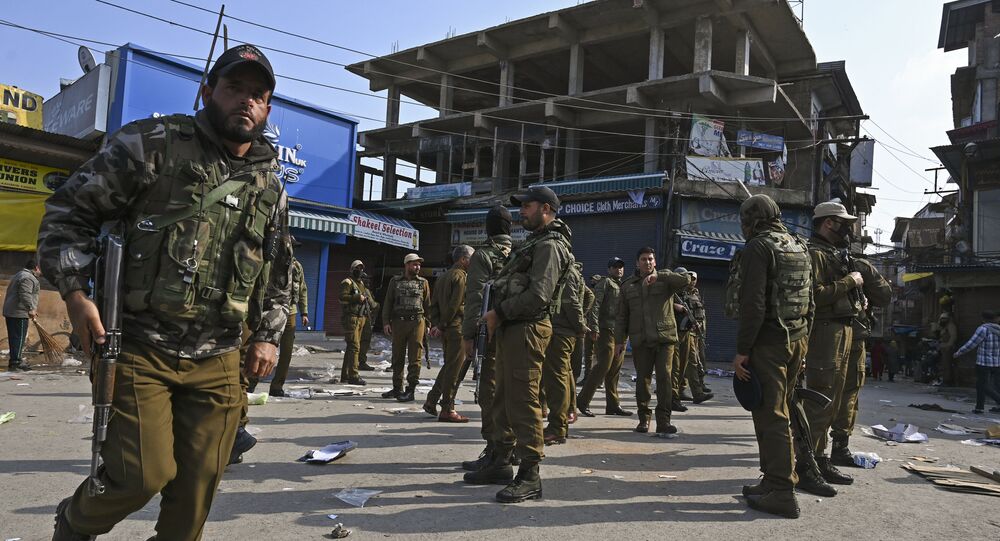 New Delhi (Sputnik): The Indian government said on Wednesday that offices and educational institutions are working as normal in the Kashmir Valley. However, the authorities admitted that the internet will only be restored when the local administration gives them the green light.

Terror incidents in Jammu and Kashmir, specifically in the Valley, have dropped to “almost nil” due to the actions of government and security personnel, Indian Defence Minister Rajnath Singh said on Wednesday.

This security network was beefed up in August to neutralise potential protest activities following the decision to revoke the region's decades-old special quasi-autonomous status.

"Terror incidents have been taking place in Jammu and Kashmir for the last 30-35 years. But I must compliment the forces. Terror incidents have now come down to almost nil,” the minister claimed while responding to a question raised by the opposition Congress in the Indian Parliament on Tuesday’s terror-related killings in the Jammu and Kashmir region’s Anantnag district.

Rejecting the opposition’s charge of the government misleading Parliament on the situation in Kashmir, the minister claimed Kashmir has not experienced a major incident in the last five-and-a-half years.

He also asserted that not a single person has died in police firing since 5 August though many feared bloodshed and more killings after the revocation of the region’s quasi-autonomous status.

As regards the restoration of internet connections which have remained suspended for four months, the government has said telecom companies have to submit signed bonds committing that internet usage will be only for business purposes and that they share all “content” and “infrastructure” of the internet as and when required by the “security agencies”.

The bond consists of six points, including no uploading of encrypted files containing videos or photos, no social networking, proxies, VPNs’ (Virtual Private Network) and Wi-Fi for the allowed IP (Internet Protocol address) and a commitment that all USB (common interface) ports will be disabled on the network, Indian news website The Wire reported.

According to the website, companies will be held responsible “for any kind of breach and misuse of internet”.

On 5 August, just hours before the central government revoked Jammu and Kashmir’s special status and later split the State into two central government administered union territories, authorities imposed a communication blackout across the valley to prevent any breakdown of law and order.

However, in the last week, internet connections are being restored in some hotels, guesthouses, travel agencies and government offices subject to them being used only for official purposes.

Kashmir, Ladakh to be Most Developed Regions in a Decade, Says Indian Commerce Minister