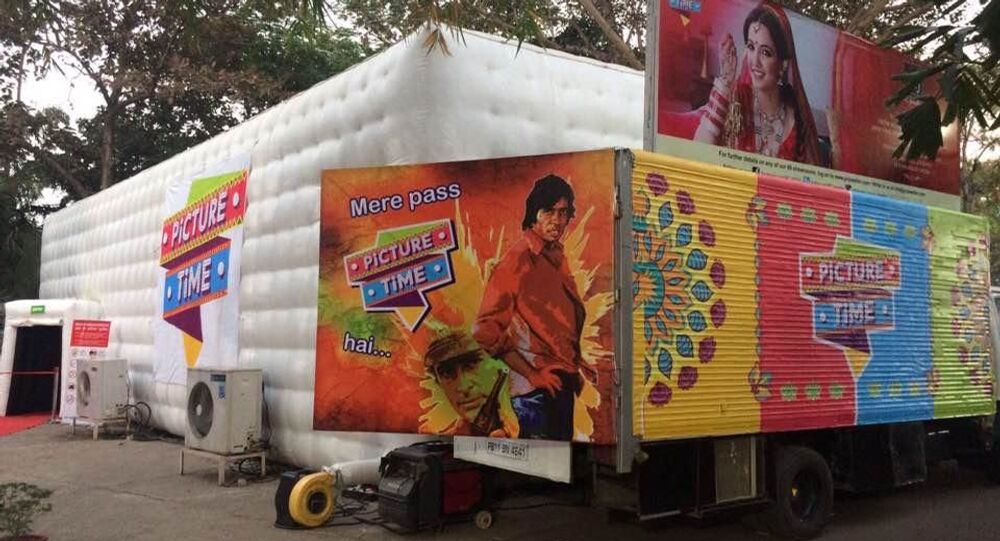 New Delhi (Sputnik): While dialogues and songs from iconic Bollywood “masala” (spicy) movies echo across the world, for years rural and remote areas of India have been cut off from modern cinema due to a lack of resources.

Over 65.5 percent of India's 1.37 billion inhabitants still reside in rural and remote areas. Plagued by a lack of resources, rural areas had no doorway to the star-studded world of movies until entrepreneur, Sushil Chaudhary, came up with a make-shift “cinema on wheels” concept called “PictureTime” back in 2015.

Wishing @sushilchaudhary, The Captain of the ship, A Very happy Birthday. Thank you for all your guidance and support, Sir. Moreover, thank you for creating @picturetimedigiplex You are the best. Have a blessed day.

“PictureTime DigiPlexes” are basically inflatable theatres carried from one village to another in trucks. When assembled, the DigiPlexes are complete with air conditioning; proper chairs, big screen and high quality Dolby surround sound to provide village-dwellers with a high quality urban cinematic experience.

What an #wonderful experience in a make shift theater. When the #trailer was playing I didn't even realize that I am not in #INOX. They take just 3 hours to set it up. #Amazing concept @sushilsays and thanks @PictureTime4 for a special tour of the theater. pic.twitter.com/lUU5KejTso

​“In the United States, for every million people there are 117 multiplexes, whereas India only has 12. In totality, India has just 2,200 multiplexes which are located in the bigger cities or towns. With the DigiPlex infrastructure, we create custom-made and acoustics enabled inflated enclosure to house 120-150 people to come and enjoy movies,” Chaudhary told Sputnik, on the sidelines of the 50th International Film Festival of India (IFFI), in India’s beach-state, Goa.

In urban India, it costs at least $9 (Rs. 600) per person, which could be seen as quite extravagant a spend on entertainment in a country that is already going through a rough phase in its economy.

But “PictureTime” charges just $0.70 for a ticket and shows newly released mainstream feature movies and regional films along with on-demand shows of old classics and documentaries.

“Rural India’s appetite for entertainment is not much different from the urban. They want new films on big screens and sometimes people demand older films,” Chaudhary noted.

The company currently has 10 mobile cinemas covering remote areas in the states of Chhattisgarh, Odisha, Jharkhand, Uttar Pradesh (UP), Madhya Pradesh and Maharashtra.

“We are planning to set up 100 screens next year and grow in more states including Bihar and West Bengal. We are working with India’s Central Industrial Security Force (CSIF) along with other country agencies. Our vision is to set up 3,000 DigiPlex screens across India,” Chaudhary added.

The concept that is being appreciated by Bollywood actors and directors was initiated with the first investment of $ 700,299 by Chaudhary himself. Later, the concept raised $ 3.54 million from a corporate-funding programme.

Earlier this year, hit war film, “Uri—The Surgical Strike” based on the Indian retaliation to the 2016 Uri attack, allegedly initiated by Pakistan, was screened to rural Indians.

While addressing a session at IFFI, the young director of “Uri - The Surgical Strike”, Aditya Dhar appreciated the expansion of Indian, as well as international cinema to rural areas with concepts like “PictureTime”.

“They went to small towns like Amethi and villages in Uttarakhand and Jharkhand and people there, where people were used to watching movies on dusty curtains in a tent, and they just went mad! After Uri was shown in towns and villages, countryside residents wanted to watch Avengers and GullyBoy. We are a diverse country and sadly, we have limited theatres. We must understand, content sees success region to region,” Aditya said.

Actors and directors who marked their presence at IFFI, including Anil Kapoor, Adil Hussain, Anees Bazmee and Aditya, made it a point to stop by "PictureTime" at Miramar, Panjim in Goa.

Look look who just visited the Picturetime theatre here at the Children’s Film Village. Director of the blockbuster hit ‘URI’... Aditya Dhar, your presence means a lot to us !! So glad you liked our concept. Thank you for your encouragement. @adityadharfilms @iffigoa @sushilchaudhary @satishkaushik2178 #iffi2019 #50thiffi #picturetime #adityadhar #filmmaker #uri #cinemalove

"If movies like 'Padman' and 'Toilet - Ek Prem Katha' reach the rural audience, it would amplify awareness efforts multi-fold. Movies like 'Mission Mangal', 'Padmavat' and 'Bajirao Mastani' woould also bring rural India closer to the roots of the country," said Gaurav Sharma, a delegate from the small-town of Itawa, Uttar Pradesh.

The Indian film industry is the largest in the world in terms of number of films produced. India produces nearly 2,000 films every year in more than 20 languages

The industry is expected to grow at 11.5 percent year-on-year and is expected to touch a total gross realisation of $3.7 billion by 2020, according to a report by industry lobby PHD Chamber and accommodations aggregator BnBNation.