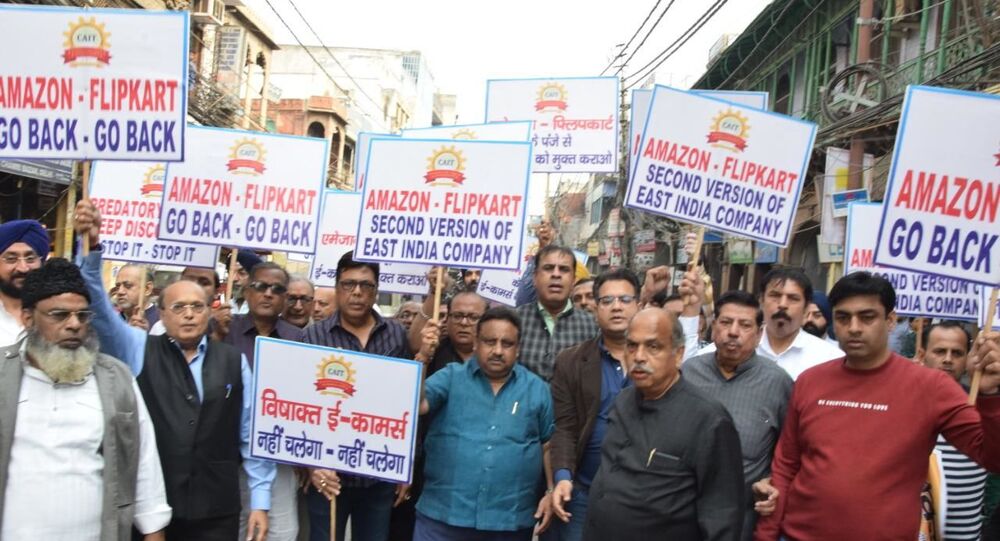 New Delhi (Sputnik): The Confederation of All India Traders (CAIT) held a countrywide protest in over 300 cities against the alleged predatory pricing and deep discounts offered by e-commerce majors like Amazon and Flipkart. Protesters also hit out at politicians for not supporting them.

Agitated over the way companies like US-based Amazon and Flipkart are gripping the retail markets in the country, around a million supporters of the Confederation of All India Traders (CAIT) held a countrywide protest march on Monday.

The protestors submitted memoranda to the District Collectors for Prime Minister Narendra Modi, to highlight that they regard Amazon and Flipkart as being similar to Britain’s East India Company (which ruled India before 1947), saying the e-retailers should be immediately stopped from conducting business in the country.

Terming the unethical trade practices of Amazon and Flipkart in e-commerce as an "economic epidemic", Praveen Khandelwal, Secretary General of CAIT said if these companies were not stopped from their own arbitrariness then the future of commerce in the country would be at risk.

“There are chances that more foreign companies will do business in India with similar practices and the e-commerce and retail trade having an annual turnover of more than $633 billion dollar approx. (INR 4.5 million crore) will be hijacked and get monopolised in few hands,” said Khandelwal.

Protesters also took a dig at all the political parties in the country for their silence on this issue and claimed that their silence will cause much harm to not only 70 million traders of the country but also to the 400 million people employed by them. 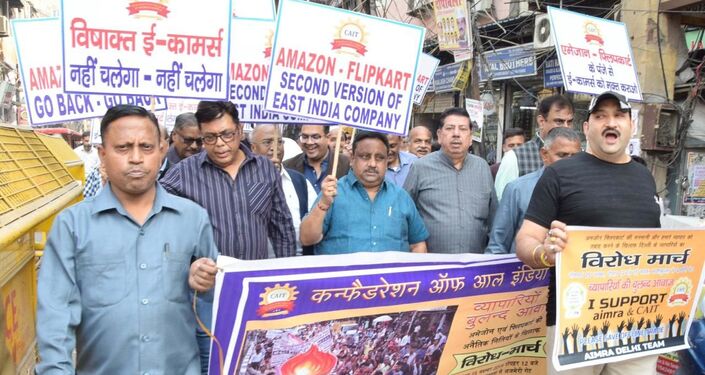 Amazon and Flipkart are acting as the second version of the East India Company, which needs to be stopped immediately in the larger interest of trade, economy and the country, he added.

The traders also said it was immensely disturbing that gross violations of FDI (foreign direct investment) policy were being done by these two companies. The traders allege that Amazon and Flipkart are selling goods at less than cost, giving huge discounts, influencing the prices in the market, creating an uneven level playing market and other unethical business practices, selling exclusive products on these portals and causing huge losses of revenue to the government,

"We are astonished to see that even after complaining at all levels with supportive evidences, no action has been taken against these Companies so far which is matter of grave concern," said CAIT's National President B.C. Bhartia.

Last week, the CAIT had requested a meeting with Prime Minister Narendra Modi to complain about the alleged unfair trade practices being followed by Amazon in the country.