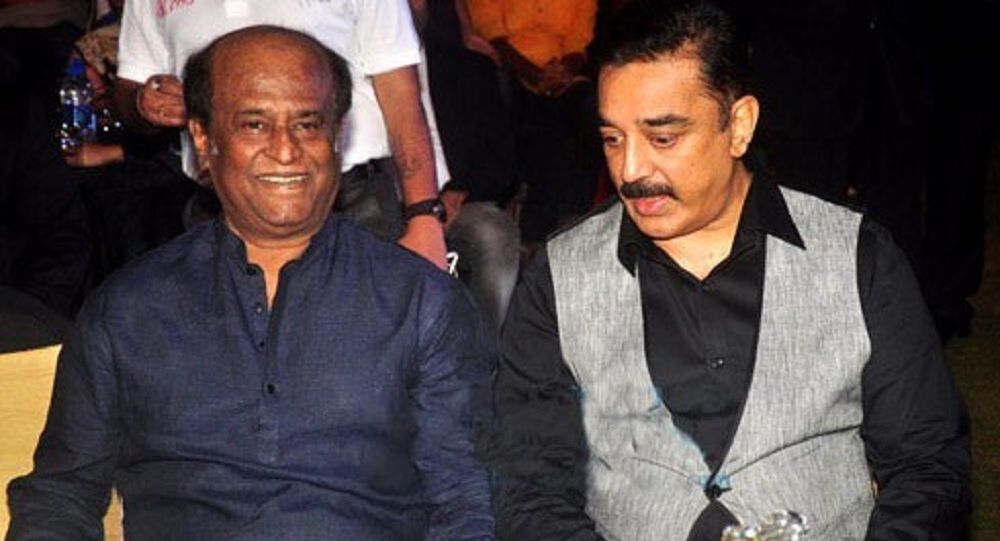 New Delhi (Sputnik): The southern Indian state of Tamil Nadu is known for its cinema frenzy - where actors have made successful careers in politics and reached top positions in state politics riding on the support of their fans and stardom, as many people in the area revere them lofty status.

South Indian actor Rajinikanth and actor-turned-politician Kamal Haasan have indicated that they may join forces politics for the welfare of their state Tamil Nadu.

“If a situation arises wherein I and Kamal have to join hands for the welfare of the people of Tamil Nadu, we will surely come together", said megastar Rajinikanth.

While 65-year-old Kamal Haasan floated his political party Makkal Needhi Maiam (MKM) in 2017, Rajinikanth is yet to enter the fray.

Both actors have a huge fan following on social media: Haasan has 5.7 million followers on Twitter, and Rajinikanth has 5.6 million.

In Tamil Nadu’s political history, actors from the state have emerged as successful leaders amassing love and affection from “fans” in politics as well.

Lakshmana believes history may not repeat itself in the case of these actors as their fan following may not necessarily convert into votes.

“There is a fundamental difference here; these two actors have not indulged in political or social activities that will endear them to the masses, and their popularity ends at the box office (theatres)".

Mentioning the two renowned actors - late actor-turned-politicians MGR and Jayalalithaa - both of whom have been the chief ministers of the state, Lakshmana said unlike the new duo, MGR and Jayalalithaa were always politically inclined and up front about things even during their film career.

Jayalalithaa (68), who died in 2016, served as Tamil Nadu chief minister for a record six times. She was regarded as a “superstar with articulate and strong opinions” when she joined politics. She was called “Puratchi Thalaivi” (revolutionary leader) by her fellow party members, and Amma (mother) by people of the state.

Similarly, her mentor Maruthur Gopalan Ramachandran (MGR) was a big name in the Tamil film industry. In his career as a politician, he was popularly known for taking up activities that genuinely affect people.

“People in Tamil Nadu are very much influenced by what they screen. They saw these people as God who could do no wrong", Lakshmana said, adding that this culture is slowly becoming “obsolete” now.

Asked if Kamal and Rajnikanth will play a role in India's national political scene, he said “their popularity starts and ends in South India”.