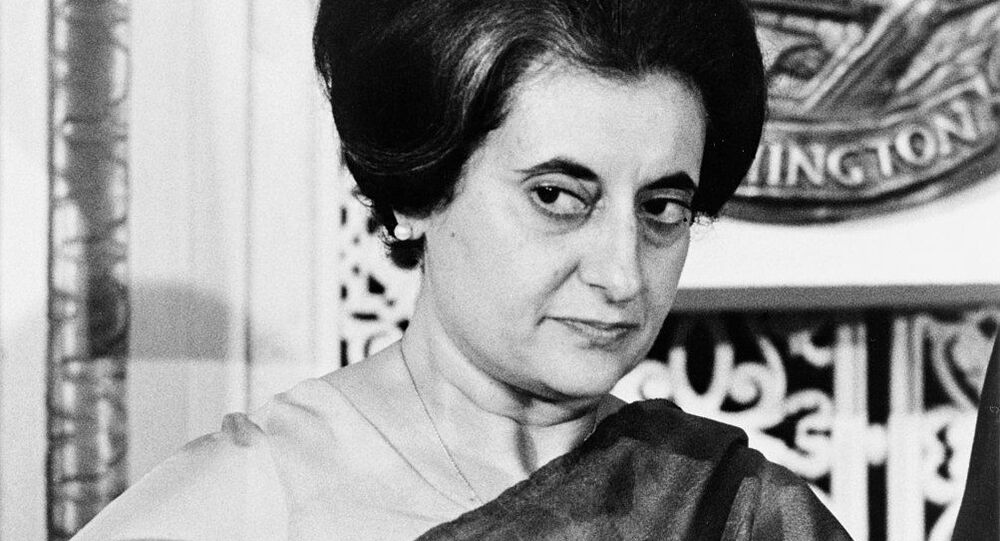 New Delhi (Sputnik): Known for her iron resolve, Indira was famous for taking unconventional decisions including going to war with Pakistan over Bangladesh and challenging societal norms by marrying Feroze Gandhi, a Parsi by religion.

Memories of first woman Prime Minister of India Indira Gandhi remain strong and on what would be her 102nd birthday people on social media are remembering what a charismatic lady she was.

Many recalled how she donated her jewels to the country during the 1962 Indo-China war, while others remembered her for her unflinching courage and decisive role in waging war against Pakistan to liberate East Pakistan (now known as Bangladesh).

Indira Gandhi Ji donated her jewels to the country during the 1962 China War.

So that the pills can be purchased.

Indira Priyadarshini Gandhi was the best of PM for all Indians and worst of foe for all enemies.

Her relentless endeavour to transform India into a major power is something only a Nehru-Gandhi clan could do.

Priyanka Gandhi, granddaughter of Indira Gandhi and daughter of Congress President Sonia Gandhi made the most of the day by sharing her childhood picture with Indira, saying “In memory of the bravest woman I have known.”

In memory of the bravest woman I have known. #IndiraGandhi

“In the fell clutch of circumstance
I have not winced nor cried aloud.

Under the bludgeonings of chance
My head is bloody, but unbowed. pic.twitter.com/ifmXkighYo

Tributes to our former PM Smt. Indira Gandhi Ji on her birth anniversary.

Netizens also took the opportunity to share “rare” and “unseen” pictures of Indira while remembering her for her journey as leader and how she conquered the male dominated political scene.

My tributes to #IndiraGandhi Ji on her birth Anniversary. Indira ji endured bullets so that terrorism was eradicated & we could sleep in peace, she tore Pak into two pieces. She sacrificed her life to uphold India’s integrity. She was such graceful PM. Had both josh & hosh! pic.twitter.com/I6SotMZRqU

Tributes to our #IronLady #IndiraGandhi ji on her birth anniversary . She'll always be remembered for great leadership qualities. She will be remembered for her political intransigency and unprecedented centralisation of power, she is an inspiration to every Indians esply women pic.twitter.com/rtuKhAsXau

Smt #IndiraGandhi is an epitome of courage & kindness & one of the biggest Inspirations for the world,who displayed unmatched dedication to eradicate poverty & indomitable spirit to put India on top.
My humble tributes to #IndiasIndira on her birth anniversary. pic.twitter.com/09DoIlJpOs

A rare video of the Iron lady of India #IndiraGandhi ji. pic.twitter.com/0EzdlYj4VS

In 1924, when Gandhi started the ’Charkha’ movement, Indira also organized a Bal Charkha Sangh & at 12 she created the Vanara Sena which acted as the messengers of important information.#IndiraGandhi pic.twitter.com/AnzfR8dhLA

Gandhi was more than a strong political personality, she was also a fashion icon with a bouffant hairstyle, make-up and attractive silk saris.

Gandhi is also remembered as a prime minister who "outwitted" US President Richard Nixon during the 1971 Indo-Pakistani war, which came at the height of the Bangladesh crisis, sparked by the rise of a self-determination movement in then-East Pakistan.

As India declared its support for the establishment of a separate state for Bengalis, the Pakistani air force launched a pre-emptive strike, bombing multiple Indian air bases.

That's when US President Richard Nixon decided to intervene by sending a task force of the US 7th fleet to the Bay of Bengal, while a Soviet fleet followed the American warships into the bay, upping the geopolitical stakes.

Nixon branded Indira's move an "aggression" against Pakistan; and days later Pakistani troops surrendered. As the then-US national security adviser, Henry Kissinger, recalled in his memoirs, "Nixon had no time for Mrs Gandhi's condescending manner... he suspected that in pursuit of her purposes she had in fact fewer scruples than he."

Indira served the country from January 1966 to March 1977 and again from January 1980 until her assassination in 1984, when she was shot by her own bodyguards - a tragedy that sent shockwaves across the nation.

A day before her death, Gandhi made a striking speech saying: ”I am alive today, I may not be there tomorrow...I shall continue to serve until my last breath and when I die, I can say, that every drop of my blood will invigorate India and strengthen it.. Even if I died in the service of the nation, I would be proud of it. Every drop of my blood... will contribute to the growth of this nation and to make it strong and dynamic."