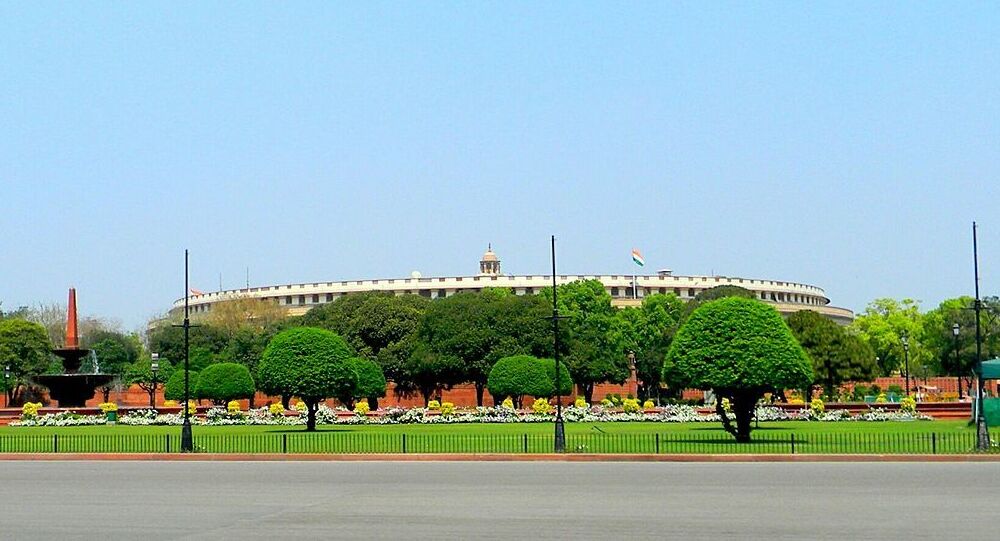 New Delhi (Sputnik): On the opening day of Indian Parliament’s winter session on Monday, members of Rajya Sabha or House of Elders and former Indian Army top brass were surprised to see a change of uniform for the marshals.

Uniforms of the marshals guarding the Rajya Sabha, the upper house of India's parliament, have undergone changes: traditional Indian outfits with turbans have been replaced by what have widely been perceived as military officer's uniforms, complete with caps, leaving many puzzled.

India's Former Army Chief, retired General Ved Prakash Malik tweeted on Monday that the copying and wearing of military uniforms by non-military personnel was illegal and posed a security hazard, while another former army officer quipped that ‘nothing is sacred anymore’.

Who allowed the Rajya Sabha's Marshals to wear uniforms resembling those of the Army's general officers? Is nothing sacred any more? pic.twitter.com/NKYyKA2eXh

The ​Opposition Congress Party's leader, former federal minister Jairam Ramesh, in turn, wondered if the change of uniform for the marshals to military-style has anything to do with an impending Martial Law, to which the Rajya Sabha Chairman hit back, asking not to raise such insignificant issues.

Some twitterians went as far as to suggest that having low-end employees dress in uniforms similar to that of top Army brass demeans the armed forces.

1/n
Haryana Univ wants an IAF Aircraft to be placed at its campus so as to motivate the youth to join AFs. However, on the other hand, AFs are being demeaned by making their Ceremonial Uniform being worn by Marshals of Rajya Sabha who are Class IV Employees. pic.twitter.com/YYHHrjImcL

​Junior Minister for Road Transport and Highways and retired General, V.K. Singh said what has been done was wrong.

But there were some, who felt there was nothing wrong in the new uniform for the marshals of Rajya Sabha – a dignified one on the occasion of its 250th Session.

A much neater & dignified uniform for the Marshals on the 250th session of Rajya Sabha. pic.twitter.com/pTpTmErSsW

​The marshals of both houses of Indian Parliament traditionally wore a white uniform, with turbans. The marshals in the lower house of Parliament continued to wear regular clothes; the change was made only in the upper house.

The new uniform in dark blue, with shoulder insignias, gold buttons, ornamental braided cord and peaked cap resemble that of the top brass of the Indian Army. The marshals in Rajya Sabha have more ceremonial duties and assist the Chair.