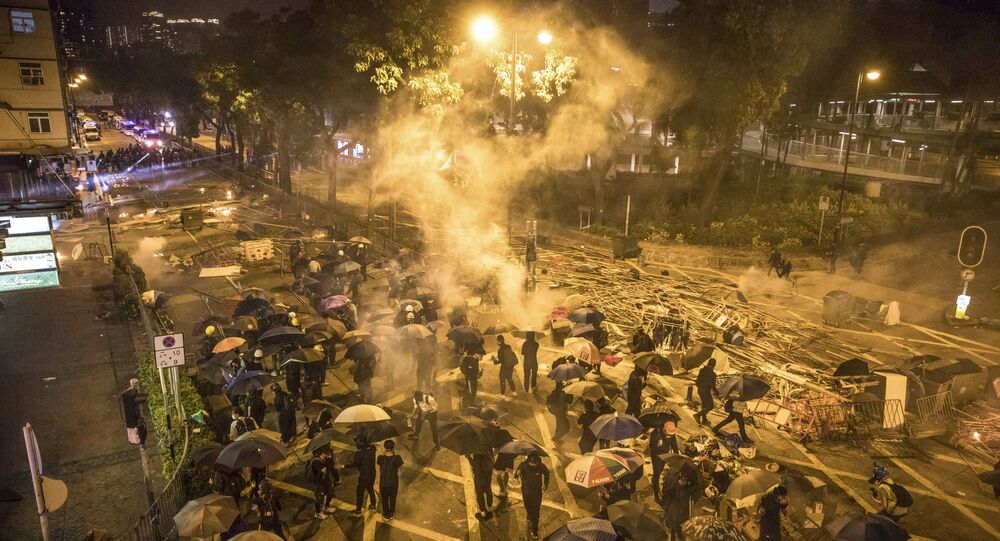 MOSCOW (Sputnik) - Thousands of local residents marched toward the Hong Kong Polytechnic University (PolyU), where hundreds of student protesters have been trapped by the police for a few days amid violent clashes, on Monday evening, according to a participant, who declined to be named.

After protesters at PolyU tried to disrupt traffic of the cross-harbour tunnel located next to the university, the Hong Kong police carried out dispersal operations by firing tear gas and nonlethal weapons such as rubber bullets. But the police faced violent resistance from protesters gathering on the campus of PolyU, who hurled petrol bombs, bamboo poles and bricks, with some shooting arrows at police officers.

Amid rising tensions and escalating violence, the police decided to shut down all exits to PolyU, trapping hundreds of protesters, most of whom are students of PolyU and other universities in the city.

According to a widely circulated video of an anonymous student trapped inside PolyU, the protesters were running low on water and food in addition to their power supply being cut off.

"There’s no way out. The police outside are firing tear gas, rubber bullets and maybe live rounds toward us. We have barely anything to protect ourselves against them", the girl covering her face with a black cap and a gas mask said in the video.

The unnamed protester called on local residents to help those who had been trapped inside PolyU to escape and avoid potentially brutal consequences.

Answering calls in Telegram groups to assist the trapped students, thousands of Hongkongers gathered in the streets next to the besieged university and tried to break through the police barricade. But the crowd had to retreat after the police fired tear gas, according to a participant on the scene.

One protester expressed pessimistic views that the world knew what was happening at PolyU, but there was nothing they could do to help those trapped inside. Others refused to share more details of the situation inside when reached through social media.

During a press briefing on Monday, John Lee, the secretary of security in Hong Kong, said that everyone trapped inside PolyU would be arrested for taking part in rioting. He also called on them to leave the university peacefully and follow the instructions of the police.

However, Director of Applied Social Sciences of PolyU Chung Kim-wah expressed on a radio program that labelling everyone coming from the PolyU campus as rioters without any evidence "really went against my understanding of rule-of-law."