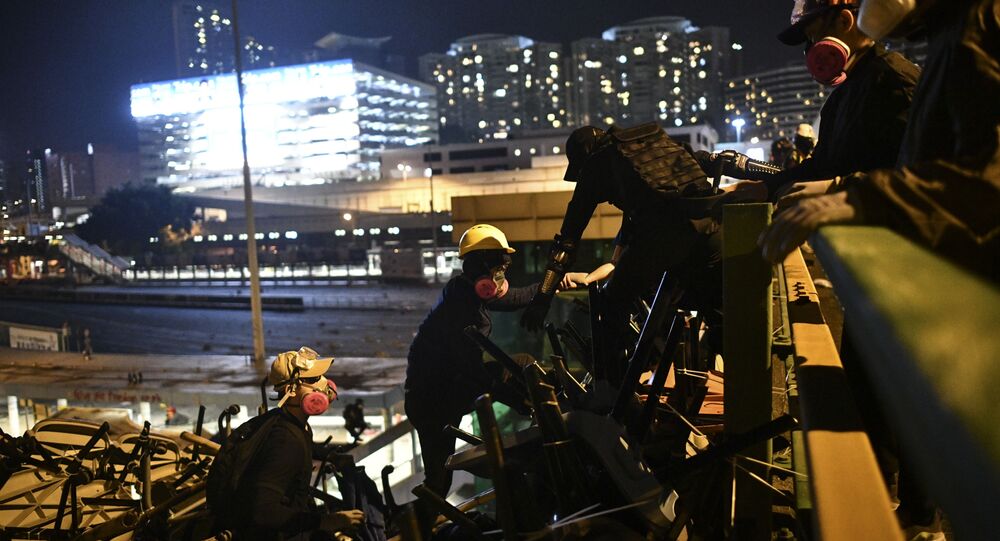 This comes amid an increase in the number of clashes between police and protesters within the past week which prompted the Hong Kong Education Bureau to announce school closures until 18 November.

Protesters in Hong Kong set the Harbour Tunnel bridge on fire as the riot police were preparing to move in, Reuters has reported.

According to the agency, the police had gathered at the end of the Cross-Harbour Tunnel bridge near the barricaded Hong Kong Polytechnic University. The protesters were reportedly shooting bows and arrows and threw petrol bombs from the university campus on Sunday, while police used tear gas and water cannons trying to disperse the activists.

One of the water cannon trucks have retreated as students responded with petrol bombs from height. Now both sides are gearing up for another round. pic.twitter.com/HZ9T6vT3oZ

​The protesters have been using the campus as a base to continue the blockade of the Cross-Harbour Tunnel, according to Reuters.

Earlier this week, Taiwan's Ministry of Education evacuated more than 500 students attending universities in Hong Kong amid the rise in violent clashes between police and protesters. The Hong Kong Education Bureau declared school closures until Monday.

Hong Kong has been engulfed in protests since early June when people took to the streets to protest against an extradition bill that would have allowed for criminal suspects to be sent to mainland China and that was eventually dropped in October.