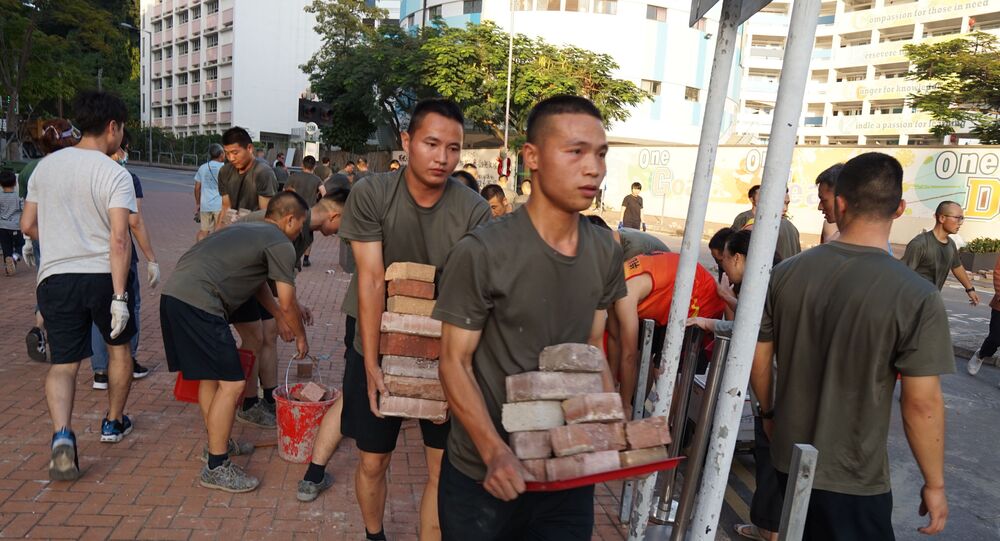 BEIJING (Sputnik) - ​China has maintained a PLA garrison in the special administrative region since the 1997 handover of Hong Kong by the United Kingdom. Locals rarely see PLA personnel since they are mostly staying in their bases and barracks. Their last outing came in 2018 when they were deployed to clear the damages left by Typhoon Mangkhut.

Soldiers from the People’s Liberation Army of China (PLA) have appeared on the streets of Hong Kong on Saturday for the first time since anti-government protests began, media reported.

The soldiers wore plain shirts and shorts and did not carry any weapons, instead, they cleared debris and dismantled barricades set up by protesters, according to images posted by Hong Kong news outlet RTHK.

It took no more than 30 minutes for the approximately 400 soldiers to clear the Renfrew Road of all obstacles before they jogged back into their barracks, according to RTHK.

Hong Kong had been reeling from a violent week of protests which saw many key roads blocked and the seizure of the Chinese University of Hong Kong by demonstrators, who viewed the university as close to Beijing. In recent weeks, demonstrators have increasingly turned against institutions they believe are close to Beijing, with Bank of China branches and the Xinhua News Agency office attacked in recent weeks.

The massive protests began in Hong Kong in early June over a controversial extradition bill, which was officially withdrawn in October. Frustrated with the local authorities’ heavy-handed responses to the protests, the demonstrators expanded their demands to an independent investigation into alleged police brutality and greater civil liberties, including universal suffrage, while calling for the resignation of Hong Kong Chief Executive Carrie Lam.