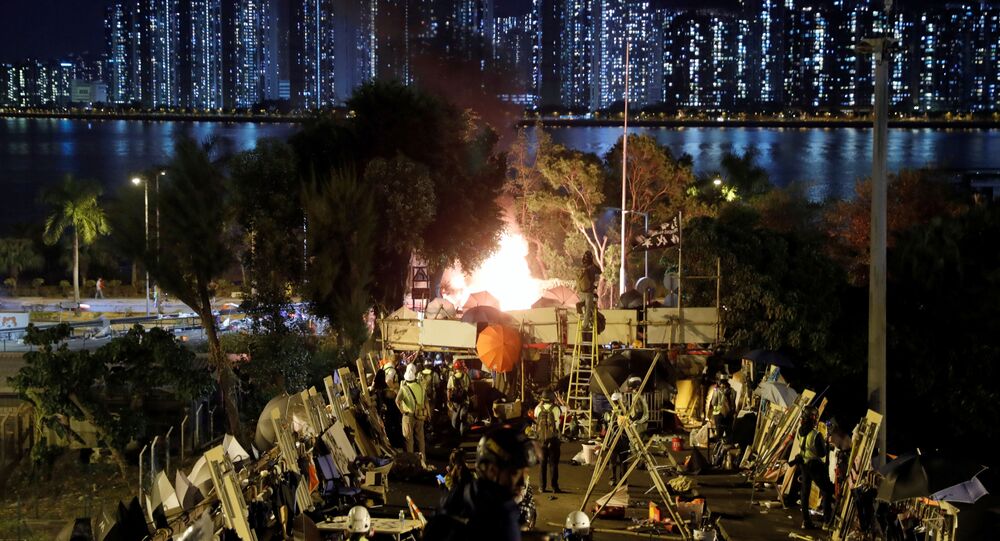 In response to escalated, student-involved violence during Hong Kong anti-government demonstrations and “riots,” Taiwan’s Ministry of Education has moved to evacuate over 500 students from the semi-autonomous city via government-chartered flight.

As of Friday, nearly half of the Taiwanese student body attending universities in Hong Kong have returned to their home state, according to a November 15 announcement from Taipei.

Police-protester clashes have increased and violence has reached new levels within the past week, prompting the Hong Kong Education Bureau to declare school closures until November 18.

Of the estimated 1,021 Taiwanese students studying in Hong Kong, the Ministry of Education reported a total of 303 are studying at the Chinese University of Hong Kong - which was barricaded and has been the site of several police-student clashes throughout this week..

“Having given repeated warning in vain, Police have no choice but to deploy the minimum necessary force, including a Specialised Crowd Management Vehicle, to facilitate retreat,” the Hong Kong Police Force said in a November 12 press release.

Officers were seen deploying tear gas and firing rubber bullets against students, who were armed with weapons ranging from bows and arrows to catapult-launched petrol bombs.

Taipei-based newspaper Liberty Times reported on November 13 that the Ministry of Education had reached out to all Taiwanese students to ensure their safety amid reports of the violence.

It’s unclear exactly when Taiwanese students are expected to return to their universities, but the ministry claimed course arrangements had been made at local universities to ensure students would not fall behind.

Following the November 12 incident at the university, Taiwanese President Tsai Ing Wen called on both the Hong Kong government and demonstrators to stop using violence and instead renew efforts for dialogue.

Droves of students from mainland China also began to flee the Chinese University of Hong Kong on Wednesday. According to a translated statement from the Hong Kong Police on Facebook, a marine police escort was required “due to safety concerns and traffic.”

Despite the university’s student body dwindling, the ranks of protesters appeared to be unchanged as they clashed with police and blocked roads on Friday.

The Police once again appeal to the Chinese University of Hong Kong to keep their promise and help us restore social stability and road safety.

The Asia Times reported there have been rumors that the Hong Kong government may impose a curfew on citizens with the hope of curbing demonstrations. Additionally, the outlet noted Taipei authorities have China Airlines and EVA Air on standby in the event that the situation in Hong Kong intensifies and some of the estimated 80,000 Taiwanese people living or working in the semi-autonomous city need to be evacuated as well.