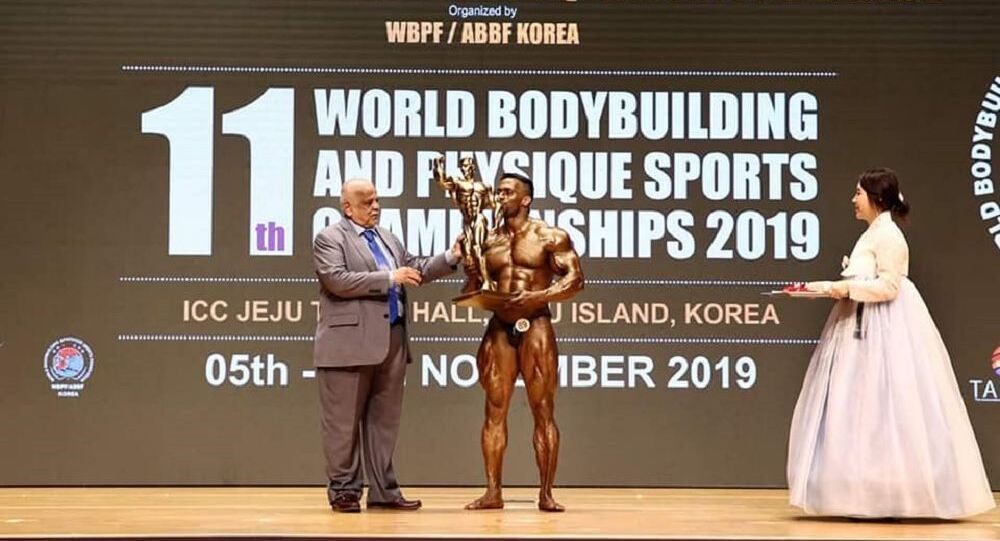 New Delhi (Sputnik): The New Delhi-based bodybuilder has returned to India for a hero’s welcome with a motorcade, as ecstatic fans cheered and clicked selfies with him. The winner also obliged his fans and supporters by flexing his muscles, and posing shirtless to everyone’s delight.

Chitharesh Natesan from the Indian state of Kerala has been named Mr Universe 2019, after first winning the Mr World title and then competing against finalists to claim the coveted top honour in the 90 kg category. He also became the first Indian ever to have won both titles at the World Bodybuilding and Physique Sports Championship which was held in South Korea this year.

A total of 38 countries participated at the 11th World Bodybuilding and Physique Sports Championship (WBFF) and India bagged a tally of 23 medals in total, including 6 gold, 13 silver and 4 bronze medals in an event held between November 5 and November 10.

India secured the second position in the team championship category, followed by Thailand.

Thrilled to have won the coveted titles and represent India on a global platform, Natesan said he was training and bodybuilding for the past 10 years when he was selected for the Indian team, and began preparations for the international championship.

He shared that he added another feather to his cap earlier this year, by winning the International Bodybuilding and Fitness Federation Mr Asia 2019 title in Indonesia in September.

“After winning the Asian Bodybuilding and Physique Sports Championship earlier this year, I went on to participate in the World Championship. I am very happy to bring gold for my country India,” the Indian daily Indian Express quoted Natesan as saying.

The bodybuilder, who has several titles to his name, works as a fitness trainer in Delhi at a gymnasium. He had earlier won Mr Delhi four times and Mr India in 2015. He was also was crowned Mr World in 2018.

Natesan is also a trained Latin dancer and loves to dance for fun to take a break from bodybuilding.