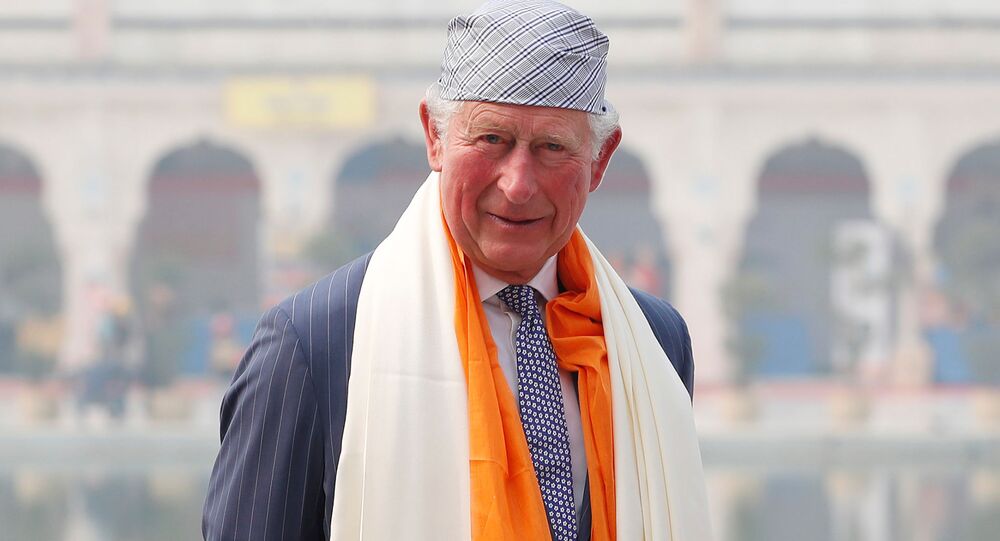 New Delhi (Sputnik): This is the tenth official visit by Prince Charles to India: just two years ago, he and his wife Camilla, the Duchess of Cornwall, paid a visit to the country as part of a 10-day tour of Asia.

Arriving on a two-day official tour to India on Wednesday, Prince Charles, the heir apparent to the British throne, met Indian President Ram Nath Kovind on Wednesday at his house in New Delhi.

The Prince is expected to discuss the issues of climate change and sustainable markets during his visit.

After reaching New Delhi, the royal visited Delhi’s famous Sikh shrine, the Gurudwara Bangla Sahib in view of the 550th birthday of the founder of Sikhism, Guru Nanak.

Ahead of his trip to India, Charles hailed the “inspiring” principles of Sikhism and the community’s contribution in United Kingdom.

"As I depart for India, on my tenth official visit, I just want to convey my warmest best wishes to all of you in the Sikh Community in the UK, and across the Commonwealth, on the 550th Birth Anniversary of Guru Nanak Dev Ji," he said.

As I depart for India, on my tenth official visit, I did just want to convey my warmest best wishes to all of you in the Sikh Community in the United Kingdom, and across the Commonwealth, on the 550th Birth Anniversary of Guru Nanak Dev Ji. The principles on which Guru Nanak founded the Sikh religion, and which guide your lives to this day, are ones which can inspire us all – hard work, fairness, respect, and selfless service to others. In embodying these values, Sikhs have made the most profound contribution to the life of this country, and continue to do so, in every imaginable field, just as you do in so many other places around the world. This week, as Sikhs everywhere honour the founder of your faith, my wife and I wanted you to know just how much your community is valued and admired by us all, and that our thoughts are with you at this very special time. . - HRH The Prince of Wales #RoyalVisitIndia #Gurupurab550

According to media reports, Prince Charles will participate in a discussion on how to strengthen disaster resilience and tackle the effects of climate change at the India Meteorological Department.

Charles, the eldest son of Queen Elizabeth II, will also confer a Commonwealth 'Points of Light' award to an Indian winner for her “exemplary” contributions in social development - uplifting disabled children and family counselling and therapy sessions.

The 70-year-old Prince’s itinerary also includes a visit to India Meteorological Department (IMD), where he will attend a discussion on strengthening disaster resilience and tackling the effects of climate change.

Prince Charles will also commemorate the sacrifices of soldiers from India, the UK and across the Commonwealth in World War I and World War II, as he will attend a military memorial service.

"I am delighted to welcome His Royal Highness the Prince of Wales to India once again on his 10th official visit. His many visits to India and his enduring interest in promoting our common interests is another example of the living bridge between the United Kingdom and India," media reports quoted British High Commissioner to India Dominic Asquith as saying.

The British High Commission said the Prince will meet Indian business leaders in Mumbai on Thursday, and seek insights on sustainable markets.

I Will Kill Myself if Extradited to India, Says $2 Billion Fraud Accused Nirav Modi in UK Court