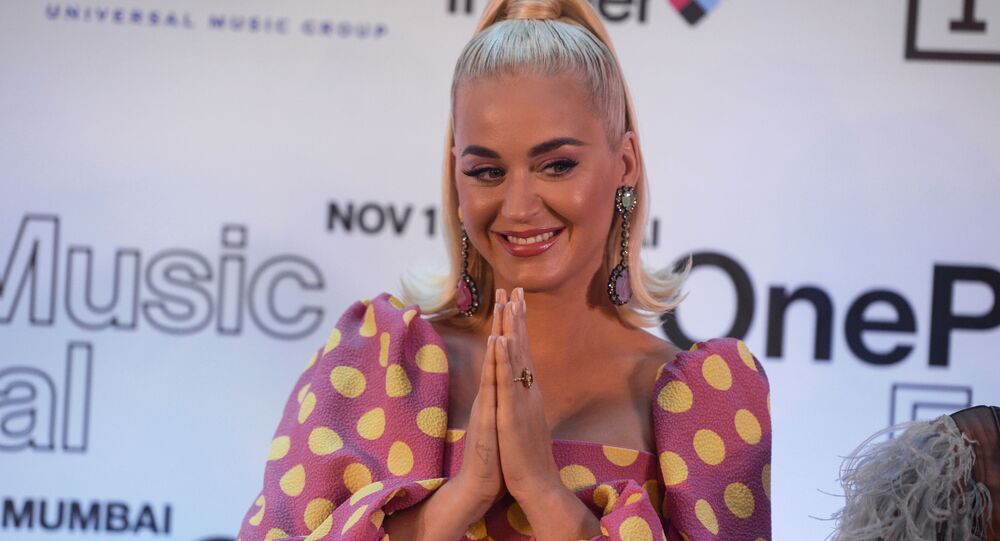 New Delhi (Sputnik): On her third India visit, the American singer will perform at the OnePlus Music Festival on 16 November at Mumbai’s D Y Patil Stadium.

International pop star Katy Perry set foot in India’s dreams city of Mumbai on Tuesday and said people can find her on the streets as she is eager to try “all things Indian”, including indulging in street food, going on a shopping spree and partying with Bollywood celebrities.

Perry arrived to sing at the OnePlus music festival, set for 16 November at Mumbai's D Y Patil Stadium, that will also see stellar performances from model-singer Dua Lipa and Amit Trivedi among others.

Katy also excited her fans in India by breaking the news of her possible collaborations with Bollywood celebs.

Katy, who is living up to her pop-star image from head to toe, wore a polka dots mini dress by Stine Goya and teamed it up with candy floss fluffy heels for the press conference with Bollywood beauty Jacqueline Fernandez.

The 35-year-old star said she is excited to immerse herself in the culture and street food, adding that people are going to catch her on the streets, as she is not going to stay put in her hotel room and order room service.

“I am going to a fun party. Going to meet some Bollywood people and hear some incredible bands. It has been a long time since I have been here,” said Katy.

Katy, who last visited the country for her show at the opening ceremony of cricket’s Indian Premier League (IPL) tournament, said: “I am excited to meet anyone interesting, who has a great perspective, care, empathy, kindness for the world and wants to do compassionate artistic things.”

Director Karan Johar will reportedly host a grand party for the music icon ahead of her gig.

Her maiden visit in 2010 saw her tying the knot with English comedian Russel Brand, however, the two parted ways in 2012. During her second visit in 2012, Katy learned transcendental meditation, which is her holy grail before writing a song or hitting the stage.