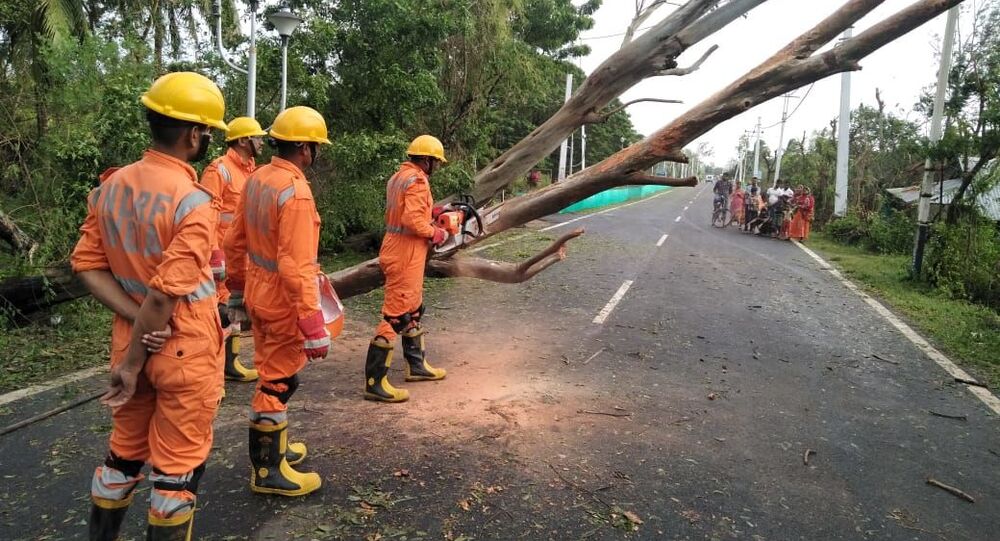 New Delhi (Sputnik): “Cyclone Bulbul” is said to be dissipating, but it has left a trail of death and devastation in its wake, according to weather bureaus and disaster response teams in India and Bangladesh.

The death toll from a cyclone that has battered coastal areas of Bangladesh and India has risen to 24, prompting national crisis management teams in both nations to assess the scale of devastation and activate response and relief measures on Monday.

India's National Crisis Management Committee (NCMC) met in New Delhi for the third time in four days to review relief measures for the eastern states of West Bengal and Odisha, the government said in a statement.

The NCMC assured affected areas about delivery of additional stocks of food items, drinking water, health services as well as the restoration of telecom and power services.

It also said that Central government teams would be visiting the affected areas in both states within a week to make an assessment of the damage.

Representatives of both states said they were making a detailed assessment and would then seek specific assistance if required.

Officials of concerned ministries and allied agencies, including the National Disaster Response Force (NDRF) and the Indian Coast Guard (ICG), attended the meeting and said that all stakeholders were fully involved in rescue and relief operations.

Nearly 120,000 people who had been evacuated over the weekend, were said to be returning to their damaged homes as the cyclone weakened, local authorities said.

Bangladesh, on the other hand, was carrying out one of its biggest evacuation drives, moving over two million people to cyclone shelters to minimise the loss of life from such natural calamities.

Packing wind speeds of up to 120 km per hour (75 mph), Cyclone Bulbul struck the region at midnight Saturday, killing 13 people in Bangladesh and 11 in India.

Five people, travelling in a fishing trawler, are said to be missing off the Bangladeshi island of Bhola.

Cyclones regularly batter the coastal areas of India and Bangladesh, claiming many lives and damaging large stretches of land as well as crops.