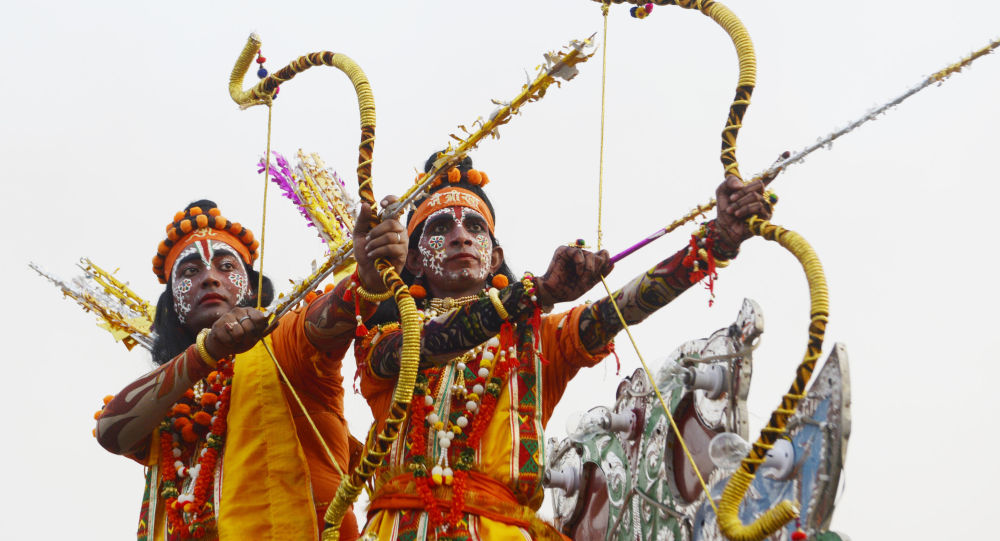 New Delhi (Sputnik): The Supreme Court of India is expected to give its ruling in the politically-sensitive Ram Janmabhoomi-Babri Masjid land dispute case before 17 November, as Chief Justice of India Ranjan Gogoi, who is heading the Constitutional Bench in the matter, will demit from office on that day.

A parody Twitter account attributed to Lord Ram, one of the incarnations of the Hindu Trinity Lord Vishnu, has taken a dig at current affairs around the legendary city of Ayodhya in Uttar Pradesh with a pinch of salt.

Twitter bio of Bhagwan Shri Ram, who identifies as the supreme being, reads Shri Ramchandra, the seventh avatar (incarnation) of the Lord Vishnu. The location for the account is Vaikunth, a heavenly abode of the lord as per Hindu mythology.

TWEET: "You are finding me in temple and mosque but I am waiting for you here on Twitter."

​With about 8,000 followers and following zero accounts on Twitter, Bhagwan Shri Ram also tries spreading peace among netizens, despite them having their own concerns to share. Netizens have all sorts of problems and they are seeking their solution from the Lord.

For instance, one Twitterati asked if it’s important to know cuss words before following the account, to which Bhagwan Shri Ram replied, saying "it depends which Ram you are following – Lord Ram or NathuRam" - a reference to Nathuram Vinayak Godse, the assassin of Mahatma Gandhi

​Bhagwan Shri Ram is also active in commenting on the issues prevailing at his birthplace Ayodhya, which is a bone of contention for between Hindus and Muslims. In a video tweet where children are sitting with umbrellas inside a school due to the faulty ceiling, Bhagwan Ram has written: “At my birthplace, kids are eating simple bread with salt, sitting inside a school with an umbrella, kids die due to poor facilities, and you think I will be happy with a statue and a temple in my name.”

​In another post, sharing the news of 20,000 litres of oil used to light 50,000 earthen lamps in Ayodhya on Diwali, Bhagwan Shri Ram says: “Amid poor facilities at hospitals and schools, they are spending Rs 133 crore to make me happy. Man is punished for his deeds and he is rewarded for his deeds. Man unnecessarily blames God for everything.”

​Bhagwan Ram is known for slaying the demon king Ravana in the Ramayana, the oldest Sanskrit epic, written sometime in the 5th century BCE. Lord Ram is considered the most virtuous hero from Hindu mythology. His character illustrates the importance and rewards of fulfilling one’s pious duty or dharma.

There is a centuries-old dispute over the birthplace of Lord Ram. The disputed land is in the Ayodhya district of northern Uttar Pradesh and is claimed by certain Hindu and Muslim organisations.

A mosque has existed at the site since 1528, which the Hindus believe was built on the exact birth-spot of Lord Ram. In 1949, some Hindus installed an idol of Ram inside the disputed structure, leading to its seizure by the authorities.

#राममन्दिर_ही_बनेगा (Ram temple will be made) is trending on Twitter with more than seven thousand tweets. The apex court will decide on the 2010 ruling of the Allahabad High Court, that had directed a three-way partition of the disputed land.