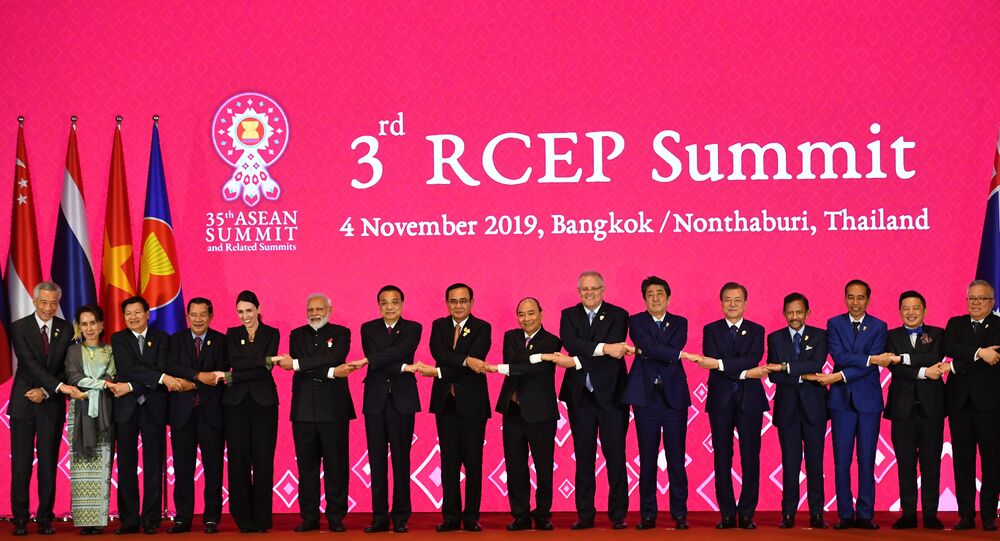 New Delhi (Sputnik): According to a statement made during the third summit of the Regional Comprehensive Economic Partnership (RCEP), India will not join the other 15 states in a China-backed mega trade deal.

A day after Prime Minister Narendra Modi announced the decision to opt-out of China-led Regional Comprehensive Economic Partnership (RCEP), Japan has urged India to reconsider its decision and return to the group.

“Japan will continue to play a leading role toward an early agreement of the sixteen nations, including India, and for signing of the agreement by the end of 2020,” said Hiroshi Kajiyama, Trade Minister of Japan.

Addressing the RCEP summit in Thailand on Monday, Prime Minister Narendra Modi said, “When I measure the RCEP Agreement with respect to the interests of all Indians, I do not get a positive answer.”

A major concern from the Indian side was the welfare and interests of farmers and vulnerable producers such as in the dairy sector, which it thought could be compromised.

All the other fifteen countries said in a joint statement that they have agreed the world’s biggest trade pact.

New Delhi was pressing for safeguards in the RCEP to prevent a sudden import surge that would negatively impact domestic industries. However, inadequate protections were a key factor that led New Delhi not to sign the pact.

“The long-term interest of industry in India is to get well integrated into global value chains and beneficial trade agreements and this could play an important role in realizing this interest,” said Vikram Kirloskar, President of the Confederation of Indian Industry, a major Indian industry association, in a statement.

The six nations in addition to ASEAN members in the RCEP talks were India, Australia, China, Korea, Japan and New Zealand.