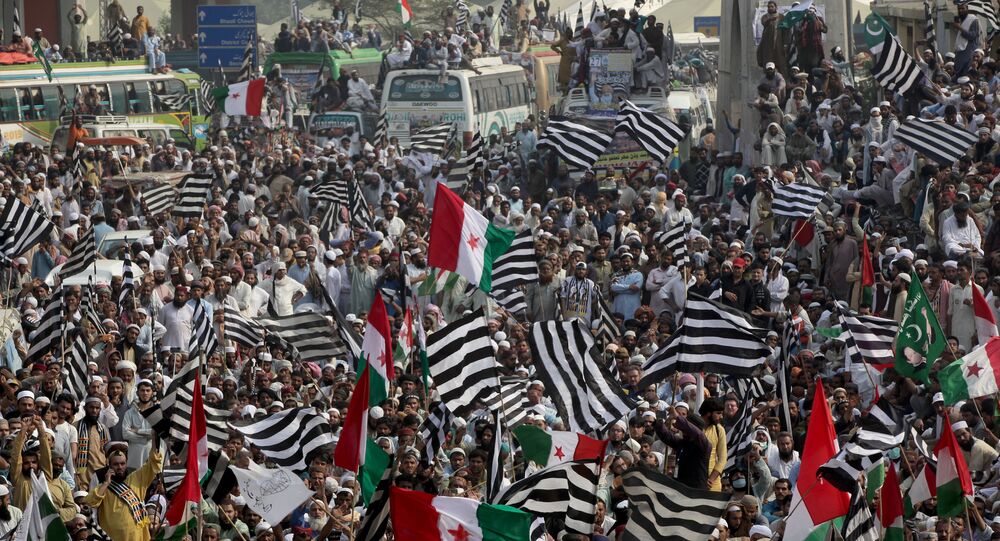 New Delhi (Sputnik): Thousands of protesters and supporters have gathered under the banner of the Jamiat Ulema-e-Islam-Fazlur, (JUI-F), Pakistan’s fifth largest political party, to unseat the federal government of Prime Minister Imran Khan, which they describe as “fake and selected."

Dubbed as the ‘Azadi’ (Freedom) March, the protest began in the country’s Sindh province on 27 October, crossed Punjab province and arrived on the outskirts of Pakistan’s capital city of Islamabad on 31 October.

Prime Minister Imran Khan instructed the interior ministry to take all necessary security measures to prevent thousands of workers and supporters of Muslim cleric Maulana Fazlur Rehman from breaching Islamabad’s Red (Security) Zone which houses all key government and military buildings, including the President and the Prime Minister’s official residences.

Though opposition political parties have given the Imran Khan-led Pakistan Tehreek-e-Insaf (PTI) government a two-day ultimatum to resign, the deadline for which ends on Sunday, they have reached an agreement not to let the anti-government march cross into the sensitive “Red Zone” of the Pakistan capital, Geo News and Dawn reported.

The Jamiat Ulema-e-Islam-Fazl (JUI-F) and its chief Maulana Fazlur Rehman’s had been hinting at moving towards “Democracy Chowk” (D-Chowk), a large town square in Islamabad, leading the federal government to deploy over 9,000 additional anti-riot police and paramilitary force personnel at sensitive locations throughout the city.

Muslim cleric Maulana Fazl-ur-Rehman has been leading the march against Imran Khan, who assumed the office of Prime Minister in August 2018, criticising his failed economic policies, increasing unemployment and poor record in improving the lives of people in Pakistan-administered Kashmir.

He has also called out the government over its inability to win substantial global support for the campaign to secure the “right of self-determination” for Kashmiris living across the border in neighbouring India.

Sending out a strong message to the ruling PTI, Rehman said on Saturday: “Your writ over Pakistan is over… Now we will peacefully run this country.”

The government says it has been negotiating with the “Rahbar Committee” comprising of members of Pakistan’s main opposition political parties such as the Pakistan Peoples’ Party (PPP), the Pakistan Muslim League-Nawaz (PML-N), the Jamiat Ulema-e-Islam-Fazlur, (JUI-F) and the Awami National Party (ANP) to end their protest.

The PTI said on Sunday that there is no question of Prime Minister Imran Khan resigning, while the JUI-F said that the “Rahbar Committee” is pondering its next move, including calling for a shutdown of the country’s highways and submitting resignations en masse.

The government has said that it will take legal action over Maulana Fazlur Rehman’s a recent statement about arresting Prime Minister Imran Khan at his official residence.

Pakistan’s Defence Minister Pervez Khattak said the government is viewing the statement as a serious attempt to breach the out-of-bounds Red (Security) Zone.

Khattak added that the door is still open for talks, but said that Khan will not give in to any attempts at blackmail by the protesters.