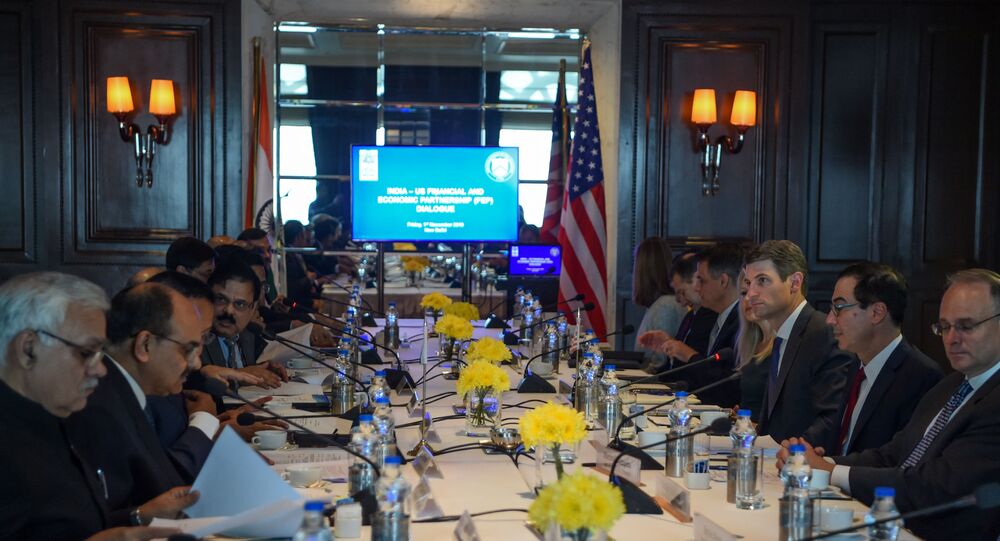 New Delhi (Sputnik) - In 2011, when the US and other nations blocked payment channels in order to bring Iran to the negotiating table over its nuclear programme, the Reserve Bank of India facilitated payments to Iran via Turkey.

US Treasury Secretary Steven Mnuchin met the Governor of India's banking regulator, Reserve Bank of India, Shaktikanta Das in Mumbai on Saturday. Mnuchin is on a tour to garner support for US sanctions on Iran.

Mnuchin and Das discussed the economy and regulatory developments. Mnuchin was accompanied by US Ambassador to India, Kenneth Juster and the Consul General of the US in Mumbai, David J Ranz.

"The discussions covered global and domestic macro-economic scenario in both countries and regulatory developments," said a release from the Reserve Bank of India.

The role of India's central bank is crucial in terms of payments for oil imports. Earlier, India planned to pay Iran in national currency in order to circumvent US sanctions but sources said that the US did not allow the escrow account mechanism to facilitate Rupee-Rial trade.

India’s Union Minister Nitin Gadkari has, in the past, mentioned a payment systems that would be involved if the two countries agreed to continue oil trade under the sanctions regime. As per the plan, payment would be made through Iranian private bank Pasargad, which was allowed to open a branch in Mumbai in 2018. India's UCO Bank and IDBI Bank, which used to route payments during previous US sanctions on Tehran, would also be used as payment channels.

Addressing the media jointly with Indian finance minister Nirmala Sitharaman after the seventh India-US economic and financial partnership meeting, the US Treasury Secretary said, "I held a meeting with a group of business leaders here and I couldn't have been more optimistic after listening to them about the multiple opportunities."

"I hope the Indian government hits the goal of $5 trillion economy faster than they expect," Mnuchin said adding that the US is working with its allies to protect India's vast energy needs in the context of the Iran sanctions.

India also told the US about its need to have land access to Afghanistan and Central Asia and a link to Chabahar Port in Iran.