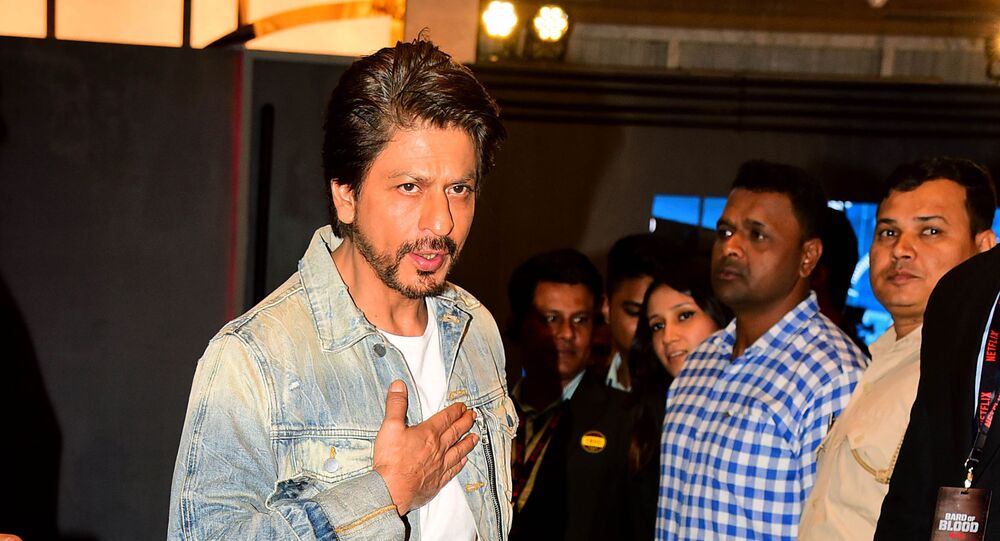 Along with members of the Indian film fraternity, Shah Rukh’s 3.7 billion fans from around the world, who laugh, cry and connect with Shah Rukh through the silver screen, broke the internet in India with their overwhelming birthday wishes for the superstar.

With over 542,000 and 10,500 mentions respectively, #HappyBirthdaySRK and #Badshah (emperor) are trending on Twitter.

In fact, #Mannat – a hashtag dedicated to Shah Rukh’s iconic Mumbai seaside residence, is also trending on Twitter, with over 40,000 post-mentions.

The Urdu word “Mannat” translates as “wish” in English.

Happy happy birthday to my sweet friend. To many more smiles like this ! Have a wonderful day @iamsrk pic.twitter.com/Z10pky7ouq

From meeting you for the 1st time on the set of Benam Badshah in 1990, to now, almost 2020, you haven't changed a bit! The power in your eyes, the swagger, confidence, humour, warmth, kindness & your love for my family! Keep inspiring the world my friend! Happy Birthday, @iamsrk! pic.twitter.com/FoyYWCmEyq

Happy Birthday to someone who's as witty and charming on-screen as he is in person!
Have a great one my dear friend, @iamsrk 🙂 pic.twitter.com/6GcNdIXE0X

Happy birthday @iamsrk. Thank you for inspiring us with your incredible work. I love you 3000.

Wishing you a very Happy Birthday scorpion superstar ! 🌟May you grow from strength to strength, Shah,.The most wittiest warmest helpful costar ever . More power to you ♥️🎂@iamsrk . pic.twitter.com/84ImA8CcWT

Happy Birthday @iamsrk😍From Dil Se till now u never cease to amaze me.I always learn something new when ur around. All I wanna say is ThankU 4 ur big heart,ur madness,the way u inspire me & 4ur wicked sense of humour.Wish u loads of love, happiness,success & good health always❤️ pic.twitter.com/teTgSYHUYp

Repeating an annual tradition among fans, thousands gathered outside Shah Rukh’s residence with cakes and gifts in the hopes of catching a glimpse of their “hero”.

The actor makes a point every year of coming out onto the netted balcony of his house and greeting the fans who wait outside at midnight to yell out 'happy birthday'.

Fans who couldn't make it to the the dimpled-legend's home showered him with love online.

Happy Birthday @iamsrk ! I wish I could tell you how much you mean to me. I have never seen anyone like you... You have such strong charisma & positive aura that it is impossible not to love you. You are the best human being this world has seen. #HappyBirthdaySRK

We have got a special gift for @iamsrk's 54th Birthday, a colored picture of Khan Sahab's parents which He had himself tweeted that he will frame the picture ❤️#HBDWorldsBiggestMovieStar#HappyBirthdayShahRukhKhan #HappyBirthdaySRK pic.twitter.com/TQAvuBX9zs

@iamsrk is the same king who was born on 2 Nov 1965 & started his career in bollywood from 1992, he is still ruling has millions people of hearts.

"You cannot misbehave on any front with a woman with any excuse." - @iamsrk

SRK is the only actor Who shows that Money and power is a second thing
But being respectful to others is our first priority.#HappyBirthdaySRK#HappyBirthdayShahRukhKhanpic.twitter.com/33c7sEbLZM

​The actor who has been in the entertainment industry for over 30 years – is one of the world’s most recognised personalities.

When @Letterman said, the most popular movie film star in the world! ❤#WatchSRKLettermanAgain pic.twitter.com/QedhdUYwgf

​Shah Rukh was the first Indian celebrity to appear on David Letterman's show "My Next Guest Needs No Introduction", which streamed on Netflix India, immediately making its ratings skyrocket, just a week after its launch on 25 October.

Letterman’s episode featuring King Khan recorded its highest-ever IMDb rating of 9.1, leaving behind all other episodes, which had featured guests including US President Barack Obama, actor George Clooney, Nobel Laureate Malala Yousafzai, and many others.

With an interview so 🔥, watching once is not an option!
Tell us your favourite moment from #MyNextGuestNeedsNoIntroduction ft. @iamsrk and @Letterman @NetflixIndia#DavidLetterman #ShahrukhKhan #SRK#WatchSRKLettermanAgain pic.twitter.com/Eprw8IUNtJ

​Shah Rukh was last seen in the 2018 blockbuster “Zero” that took in over $25 million at the box-office.

The “Badshah” (emperor) of Bollywood is expected to announce his upcoming projects today.