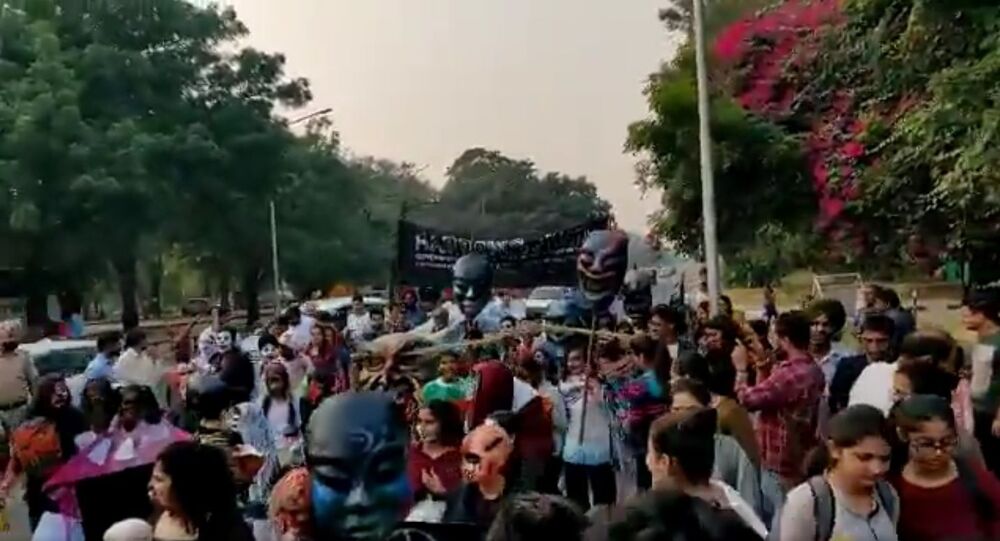 New Delhi (Sputnik): India has vowed to ban single-use plastics by 2022. Currently, the per capita consumption of plastic in the country is 11-kg per year, and it generates 26,000 tonnes of plastic waste yearly. While 60 per cent of this is recycled, the rest ends up in rivers, oceans and landfills.

Students in India took to the streets of Chandigarh city, dressed as Draculas and zombies in costumes fashioned out of discarded plastic bottles and bags with their faces painted with fake blood and make-up, to increase awareness about the demons of single-use plastic that haunt the environment.

A 50-ft. long “Plastic Demon” made of fiberglass, was carried in the rally, symbolising the ill- effects of single use plastic on the environment.

The Halloween-themed rally, named  “Harrows of Plastic” was a joint initiative by city’s Environment Department and the Government College of Arts.

The students rallied with the utmost creativity, donning clothes made out of plastic, trampoline sheets and bottles to imitate ghouls and zombies.

The rally was aimed at sensitising people to the implications of the use of plastic on the environment and saw an outstanding response from revellers, who posed for pictures and promised to cut down on their use of plastic and opt for alternatives.

The drive to ban single-use plastic throughout the country has come as part of Prime Minister Narendra Modi’s plan for World Environment Day.

Discarded plastic lying by the roadsides, accumulating in empty lots or clogging water bodies is a major challenge to India’s ambitious intent to phase out single-use plastics like cups, toothbrushes and straws by 2022. To make things worse, around 10,000 tonnes of plastic per day remains uncollected.