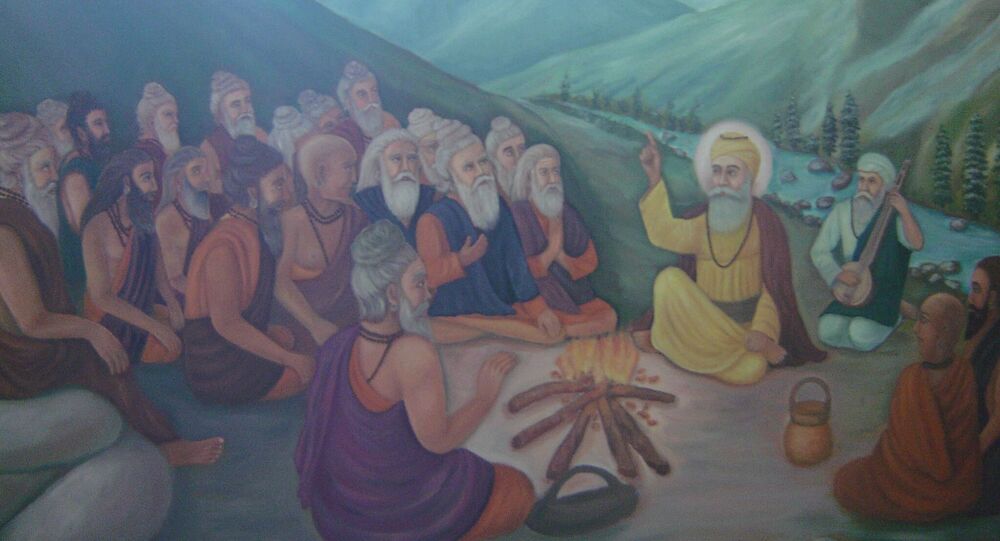 New Delhi (Sputnik): The unique Boeing 787 flight will sport the important Sikh religious symbol of "Ek Onkar", which means "God is One", and will take hundreds of pilgrims to India’s Amritsar to pay homage to their founding spiritual head.

National carrier Air India will launch a new flight between India’s Amritsar and London on 31 October as part of the 550th birth anniversary celebrations for Sikhism founder Guru Nanak Dev.

Operating three times per week - Monday, Thursday, and Saturday - the 256-seater flight will have its UK landing and take-off points at London's Stansted Airport in Essex county as slots are unavailable at Heathrow Airport.

Fully-loaded flights are expected in the near future, Indian daily The Hindu quoted Air India Chairman and Managing Director Ashwani Lohani as saying on Monday.

Popular Punjabi dishes, besides other options, will be served on this flight, he added.

The Indian government has pulled out all the stops to make Guru Nanak’s 550th birth anniversary, which falls in November a signature event.

Special events are going to be held at Indian diplomatic missions overseas, while at home commemorative coins and postage stamps will be released by India’s central government.

Religious activities will also be organised across India for the occasion and UNESCO will be requested to publish the writings of Guru Nanak Dev in many languages.

Indian Railways will run a train through various holy places associated with the Sikh spiritual leader for pilgrims and tourists.

Last week, as many as 84 heads of foreign missions headquartered in New Delhi took part in the anniversary celebrations in Amritsar.