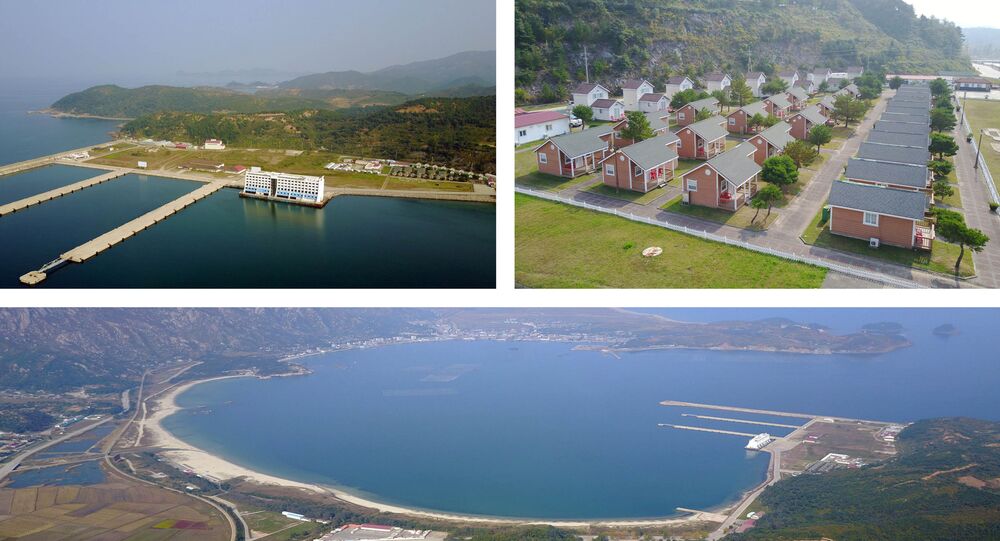 DPRK leader Kim Jong-Un reportedly stated on Wednesday that the South Korean-owned Mount Kumgang facilities should be demolished to make way for more modern architecture, saying that it was “mistake” to consider the resort ordinary property on North Korean soil.

Republic of Korea (ROK) Foreign Minister Kang Kyung-wha said that tours of South Koreans to the Democratic People's Republic of Korea (DPRK)'s resort site at Mount Kumgang are not subject to international sanctions.

While speaking at a press conference in Seoul on Thursday, Khang claimed that UN Security Council sanctions "basically" do not apply to ROK citizens touring the DPRK but are rather decided by South Korea's Unification Ministry, the government body responsible for inter-Korean affairs, according to local media reports.

Her statement comes a day after a Ministry of Unification (MOU) spokesperson said on Wednesday that they would be willing to discuss an order from the North Korean government to “remove all” South Korean-built infrastructure on the site in order to protect "our people’s property rights… and the resumption and activation of tourism, at any time”.

“As soon as we confirm the facts, we will examine them and work out plans to take action,” spokesperson Lee said, and stressed that the ROK government will propose inter-Korean dialogue on the issue.

In a separate statement, the ministry confirmed that the order to demolish the resort at Mount Kumgang was done “with an agreement with the relevant unit of the south side”.

Hyundai Asan, the South Korean-owned company which holds the lease for much of the Mount Kumgang resort, said in a press statement that “we are disconcerted by the sudden report in a situation where we have prepared for the resumption of tourism”.

According to Rodong Sinmun, the DPRK's official newspaper, Kim Jong-Un said he would welcome the ROK compatriots at any time if they were to visit Mount Kumgang.

Chairman Kim insisted that the facilities were  “reminiscent of temporary buildings at construction sites” and that they should substitute them with “modern” architecture.

I've just talked to a professor who have been to the Mt. Kumgang tour years ago. Says it was, indeed, poorly organised, starting w/ a crappy cruise ship taking ages (overnight) to get to the North & says the hotel looked like "makeshift buildings," just like what KJU said. https://t.co/U7pcF0hYOZ

It has been considered an example of cooperation between the two Koreas and has even played host to reunion events for families separated by the Korean War (1950-1953).

However, economic cooperation and tours of ROK citizens to Mount Kumgang were suspended in July 2008 by then-South Korean President Lee Myung-bak after a South Korean female tourist was shot dead by a DPRK soldier after allegedly wandering into an area considered off-limits.