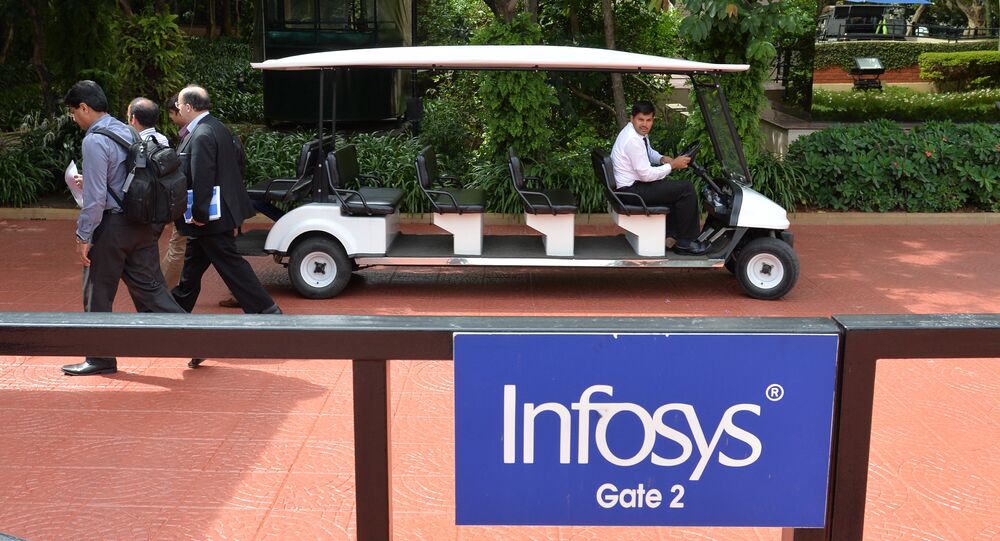 New Delhi (Sputnik): The shares of India’s second largest IT firm Infosys dropped 16 percent on Tuesday after the company’s CEO and Chief Financial Officer were accused of indulging in unethical business practices by unidentified employees.

The $11.8 billion company, with a market capitalisation of nearly $47.7 billion suffered its worst single-day decline in over six years exposing the company to the risk of potential uncertainty and strained stock rates, the media reported.

The unethical step was aimed at boosting short-term revenue and the company's profits, the media reported on Monday.

Unidentified employees, who have charged the company executives first wrote a two-page letter to the board of directors on 20 September. But after receiving no reply from the board, an un-named whistleblower escalated the complaint to the US-based office of the Whistleblower Protection Programme.

In response to the whistleblowers' complaint, Infosys Chairman Nandan Nilekani in a statement said the company's audit committee would conduct an independent investigation into the accusations against Parekh and Roy.

According to reports, Nilekani has assured that the complaints will be dealt with in an objective manner,  saying that the allegations will be investigated to the fullest extent.

To ensure the independence of the investigations, both of the accused have been recused from the case.

In addition to resorting to incorrect business practices, Parekh has also been accused by employees of using the racial slur “Madrasi” for South Indians at the workplace.

Netizens shared their reactions to the issue on Twitter claiming that the drop in Infosys stock was quite expected. A section of the Twitterati was also agitated about the use of racist remarks.

As expected, Infosys shares touched lower circuit after letter from Whistleblower. Another instance why Corporate Governance should be taken seriously. It is beyond a quarterly submission to Stock Exchanges.

One word changed the entire state of a company. @Infosys had a major downfall of its stock by 16% after a complaint was filed against them #madrasi The CEO and CFO should think about the company’s well being and not on colour,caste and creed

"It takes 20 years to build a reputation and five minutes to ruin it. If you think about that, you'll do things differently" - Warren Buffet ... #Infosys