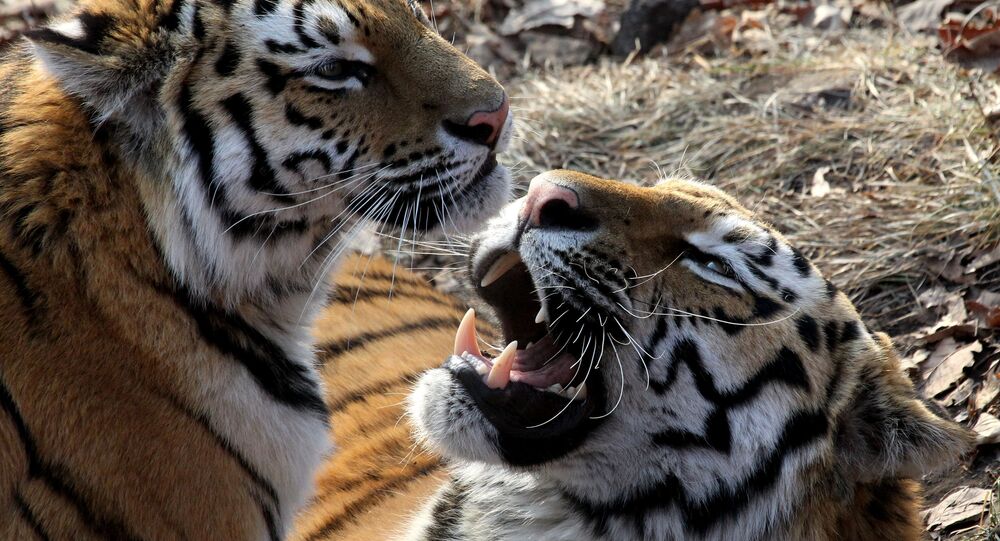 Things We Do for Love: Two Tigers Fight it Out to Woo the Heart of a Tigress - Video

New Delhi (Sputnik): Tourists visiting wildlife parks usually dream of catching even a glimpse of some big animal and with a genuine photo-op considered an outstanding result. This rare incident proved truly memorable, allowing tourists the chance to see -three big cats, with two of them engaged in a battle.

A group of tourists on a safari in India's famous Ranthambore National Park had a unique opportunity to observe two tigers fiercely fighting over the mating rights to a tigress.

Indian Forest Officer Praveen Kaswan shared the video of the incident, and since then, it has been evoking a massive response on social media.

In the video, the two wild cats can be seen roaring and attacking each other as the tigress escapes the scene, leaving them fighting to win her love.

The clip shows the eerie silence of the dense forest suddenly shattered, as a battleground erupts when the duo starts fighting their war of dominance. The situation turns intense, and even the tigress opts to flee.

The two beasts named Singhst and Rocky can be seen standing on their hind legs and exchanging crushing blows all to woo the female named Noor.

That is how a fight between #tigers looks like. Brutal and violent. They are territorial animals & protect their sphere. Here two brothers from #Ranthambore are fighting as forwarded. (T57, T58). pic.twitter.com/wehHWgIIHC

The event was a great photo opportunity for the lucky tourists who hid in the forest, capturing all of the highlights.
Some curious netizens, in a lighter vein, asked that the forest rangers disclose which of the tigers came out on top and won the right to Noor's heart.

"As many are asking about the results, T57 (Singhst) won. Nobody is seriously injured. It was for the tigress T39. Which can be seen there in the video," the officer replied.

The video has garnered around 30,000 views within 24 hours of its posting and evoked numerous reactions.
According to an official at the National Park, the ratio of male to female tigers is close to 1:1. This ratio increases the chances of fights between males.