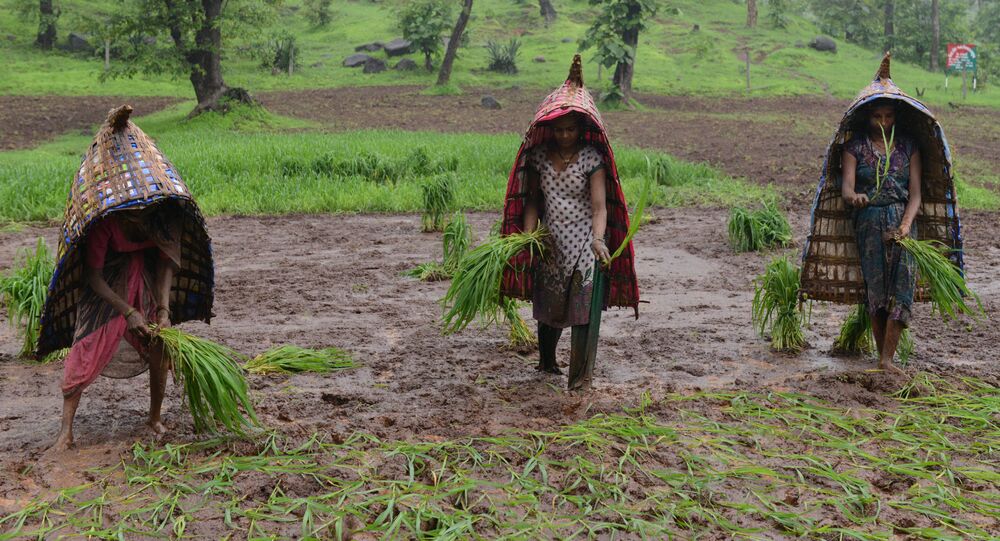 New Delhi (Sputnik): India’s national capital usually struggles with its mounting pollution problem, mainly due to vehicular traffic and construction. Currently, it is facing the challenge of stubble burning by farmers in neighbouring states ahead of the winter season.

Every year, around this time, air quality worsens due to smoke from stubble burning moving towards Delhi.

As Delhi's pollution levels deteriorated with the concentration of particulate matter increasing on Wednesday, the health of city dwellers is at stake.

The latest images from the US space agency NASA shows fires occurring in the north-western region of India and adjoining regions in Pakistan. These fires are mainly due to stubble burning in the northern Indian states of Punjab and Haryana.

After the harvest, farmers have a small time window to clear the land before starting to sow seeds again. Hence, they resort to stubble burning.

Stubble burning is responsible for around 10-15% of the pollution load, according to scientists at the Indian Institute of Tropical Meteorology (IITM).

The effect is visible as Delhi's pollution levels crossed 300 (air quality index, or AQI), on Wednesday in some parts of the city with some other areas reaching 400.

Several studies suggest that these conditions are dangerous and can cause acute respiratory disorders, especially among children less than five years old.

An analysis by the Delhi Pollution Control Committee (DPCC) suggested, there was a steep rise in PM 10 and PM 2.5 — the prominent pollutants in Delhi air — over the past five days when compared to levels recorded in the first week of October.

"The smoke travelling to Delhi from stubble burning contributes to PM 2.5 emissions here. With the increase in farm fires in the past few days, the concentration of particulate matter has risen. Calm surface winds blowing over Delhi from the west and northwest are not able to disperse pollutants," the analysis stated.

A study titled Addressing Global Mortality from Ambient PM2.5 says air pollution in Delhi is responsible for approximately 10,000 to 30,000 annual deaths in the city. This means the capital city loses 80 lives every day to PM2.5 particulate matter pollution.

According to a study by leading researchers at the University of Texas, University of Minnesota, University of British Columbia and the Health Effects Institute, the deaths are mostly from heart attacks and strokes, rather than from respiratory disorders.

Another study called the  State of Global Air 2019 states that exposure to outdoor and indoor air pollution contributed to over 1.2 million deaths in India in 2017.

However, the Delhi government recently reported that the city had witnessed record low air pollution a day after the major Dussehra

On 15 October, the Delhi pollution' action plan' came into force, banning the use of diesel generators in its first phase. Other stricter measures like discouraging private vehicles on the roads, closing brick kilns and stone crushers are expected to come into force with time, particularly following the Diwali festival in late October.