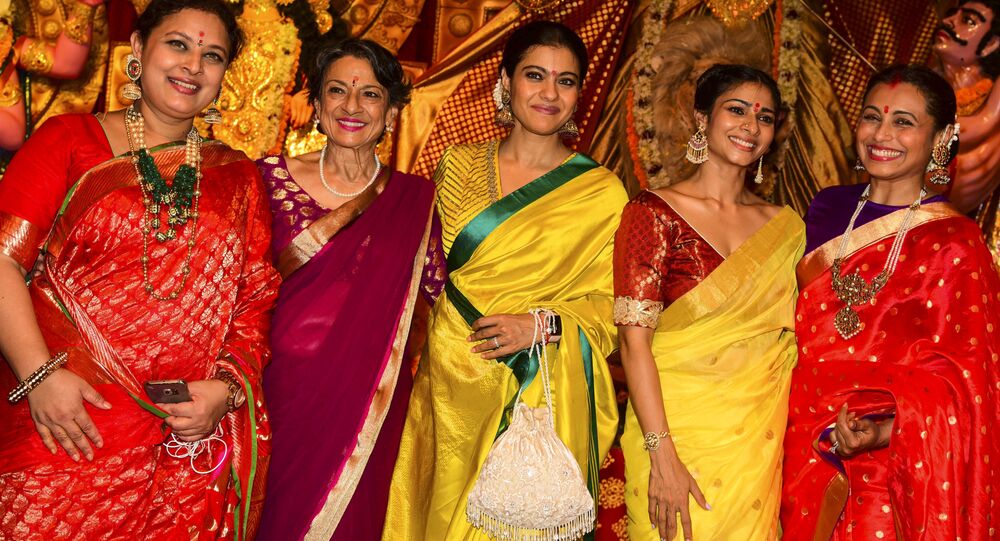 New Delhi (Sputnik): As India switches on its festive mode, just like everybody else Bollywood celebrities have also taken a break from work to enjoy “Durga Puja” – worship of the Goddess Durga, known as the deity of power in the Hindu religious pantheon.

A bunch of images have surfaced on the Internet showing B-town biggies meeting and greeting each other while hopping on “Durga Pandals” or pavilions in the financial and film capital Mumbai.

The list included megastar Amitabh Bachchan, along with his family, actresses Priyanka Chopra Jonas, Rani Mukherjee, and Hritik Roshan, among many others.

“Durga Pandals” are spots where decorated idols of the different versions of Goddess Durga are placed for people to come and pray for strength and prosperity. Multiple “pandals” are set up in every part of the country, complete with fun fairs, shopping, and food stalls.

Greetings to everyone on this special occasion of Maha Navami. Maa Durga epitomises strength, courage & compassion. May she empower us to fight the evil in us & society. May this auspicious day bring immense fortune and happiness in everyone's life. #JaiMaaDurga #mahanavami #Dandiya #Dussehra #Garba #durgapuja #DurgaNavami #ninecolours #ninecolourstore #navratri9thday

Making a rare appearance in the city, actress Rani Mukherjee, who is busy with her upcoming film “Mardaani 2” and otherwise maintains a low public profile, looked stunning in a white saree, coupled with pearls and metallic jewellery.

Rani was joined by her famous family members, including her cousins Kajol, an actress, and Ayan Mukherjee, a director. Kajol’s mother and veteran Hindi actress of yesteryears Tanuja was also pictured.

Wishing every one a very happy ashtami..... Jai Mata Di.

The squad was later joined in by the Bachchans, who were seen laughing and hugging their friends, totally entranced by the festive season, in traditional Indian outfits.

Meanwhile, 37-year-old international star Priyanka Chopra Jonas, who has been in the country promoting her upcoming bi-lingual movie “The Sky Is Pink”, was also snapped offering prayers in one of the “Durga Pandals” dressed in white.

It was a fabulous pandal, the whole structure was made of eco-friendly material, traditional temple style magnificent with live dancers beautifully dressed, temple bells ,vedic chants in the background, exquisitely lit, quite breathtaking ...!! 🙏🌟🌟🌟

Fans poured love and blessings on their favourite silver-screen artists on social media, calling the festive re-unions of so many movie stars “endearing”.