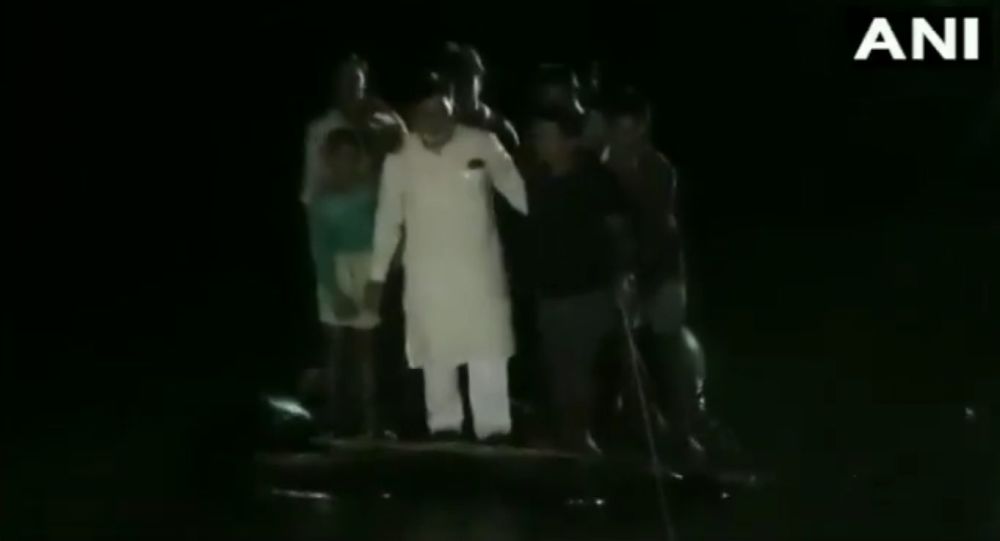 New Delhi (Sputnik): The incident occurred as a lawmaker from India’s ruling Bharatiya Janata Party was being photographed along with local residents, when he suddenly decided to stand up on the makeshift boat.

Indian government legislator Ram Kripal Yadav, who is also a former Union Minister, was visiting the flood-struck areas of the state of Bihar when he fell into water after the makeshift boat he was travelling in overturned. Seven others, including a child, were accompanying the ex-minister.

The parliamentarian was returning from surveying the flood-ravaged areas near state’s capital city of Patna.

In the incident, caught on camera, the politician and others were immediately pulled out of the water by locals in a nearby boat.

#WATCH Bihar: BJP MP Ram Kripal Yadav falls into the water after the makeshift boat he was in, capsized in Masaurhi, Patna district, during his visit to the flood affected areas yesterday. He was later rescued by the locals. (02.10.2019) pic.twitter.com/iwI4OdNGiH

The video, which has been making the rounds on social media, left many netizens fuming over the politician for risking his and the child's life.

But many Twitter users saw the funny side, calling it a "photo opportunity" for the Bharatiya Janata Party politician...

WATCH: When photo ops go horribly wrong! BJP MP Ramkripal Yadav falls off a boat while he was busy getting clicked on a boat. He was in field to take stock of flood situation!

...while others called it “karma” as several people’s lives remain battered due to incessant rains in the city.

what can be a better way than this to experience aam aadmi problem?

According to Indian weather authorities, the southwest monsoon was due to end around 10 September but it has extended across the Indian subcontinent, causing loss of lives, livestock, crops and property. So far, floods have left a total of about 140 people dead.

Earlier this week, the chief of India’s National Disaster Response Force (NDRF), S.N. Pradhan warned that the state of Bihar is facing a possible medical emergency as 13 of its 38 districts have been inundated by floodwaters.