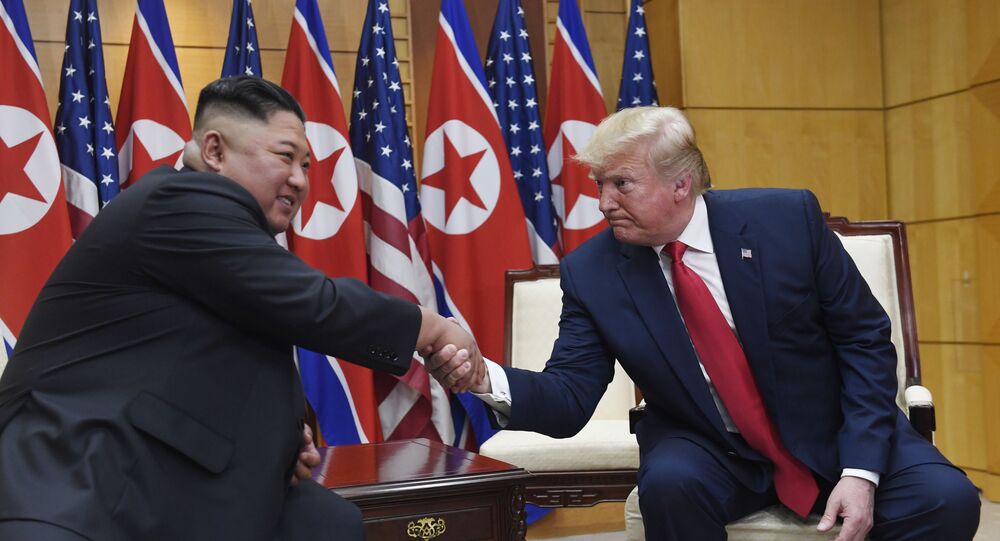 US President Donald Trump may meet with North Korean leader Kim Jong Un in Pyongyang for another summit in an attempt to bolster his 2020 reelection bid, according to a former US nuclear envoy.

"A possibility of him going to Pyongyang, I think it's quite likely. He's focused on reelection. Anything that helps the reelection, he would be wanting to do it," Joseph Yun, former US special representative for North Korea, recently said in Seoul, South Korean news agency Yonhap reports.

"Another summit is likely. Trump has engaged with North Korea, and it's been quite successful, as most Americans would agree. I don't think there's any way Trump wants this initiative to derail before the reelection," Yun added.

Last month, Trump told reporters that he “probably” won’t visit North Korea in the near future.

However, Trump told reporters Monday on the sidelines of the UN General Assembly meeting in New York that a meeting with Kim “could happen soon” and that the relationship between the two has “been very good.”

If Trump does decide to visit the reclusive state in the near future, that could give the US “leverage,” according to Yun.

"That would give the United States leverage. It's like, when they negotiate, they can say, 'If my boss goes to Pyongyang, you have got to do this for me,'" he said. "He would get a better deal. So it's not a bad idea.”

"There is a growing lessening of alliances in [Trump's] foreign policy, and North Korea has made an incredible adjustment. [Kim] has read amazingly what's going on in Washington, met Trump three times, tested missiles and increased nuclear power,” Yun added.

Although there weren’t any North Korean diplomats at the UN summit, Trump did meet on Monday with South Korean President Moon Jae In, one of the key stakeholders in the US-North Korea negotiations.

In June 2018, Kim and Trump reached an agreement stipulating that North Korea would make efforts to promote the complete denuclearization of the Korean Peninsula in exchange for the freezing of US-South Korean military drills and the potential removal of US sanctions. However, the negotiations have stalled this year over Pyongyang's continued missile tests and how to ensure denuclearization, Sputnik reported.