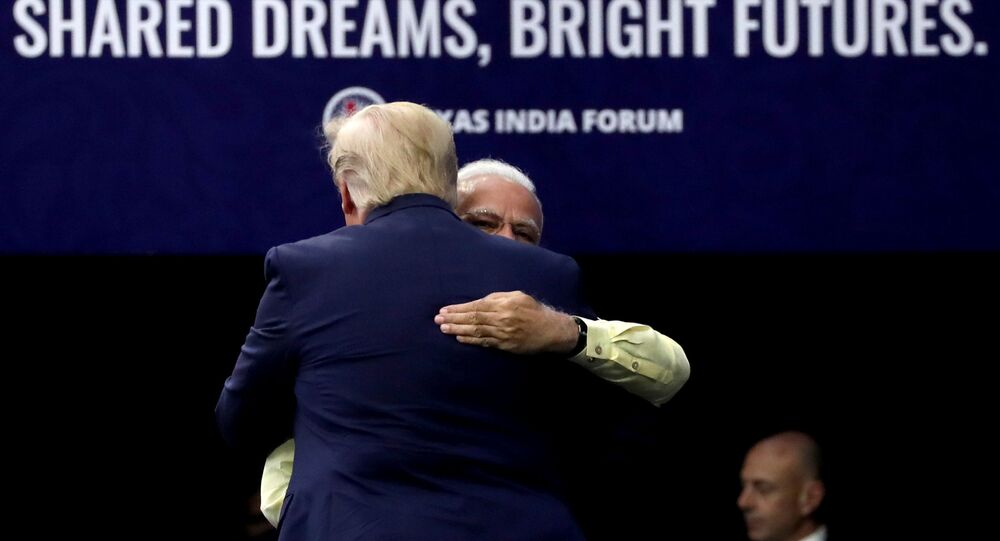 New Delhi (Sputnik): US President Donald Trump said he had “very productive" conversations with the prime ministers of Pakistan and India on the sidelines of the UN General Assembly Session in New York.

US President Donald Trump has once again signalled his readiness to broker talks between Indian Prime Minister Narendra Modi and his Pakistani counterpart Imran Khan, whom he described as “two good friends”, on the long-standing Kashmir issue.

“You look at the two gentlemen heading those two countries — two good friends of mine — I said, 'Fellas, work it out. Just work it out.' Those are two nuclear countries. They’ve got to work it out,” said Trump in his opening remarks at the press conference.

The US president said that while, with many other nations, he talked about “achieving stronger ties of fair and reciprocal trade", with Pakistan and India “we talked about Kashmir”.

“Because they’re at very serious odds right now, and hopefully that’ll get better,” he added.

Trump shared a stage at a stadium in Houston, Texas with Prime Minister Modi and addressed an Indian diaspora crowd numbering in the tens of thousands earlier this week, and later the two had bilateral discussions on a wide range of issues, including Kashmir and the trade deficit between US and India. He also met Pakistan’s Imran Khan on Monday on the sidelines of the UN General Assembly session in New York.

“I would be willing to help if both wanted. If both Pakistan, let’s say, and India wanted me to do that, I am ready, willing, and able. It’s a complex issue. It’s been going on for a long time. But if both wanted it, I would be ready to do it,” said the US president after the meeting with Khan.

Kashmir has been a major flashpoint between India and Pakistan, ever since they gained independence from British colonial rule in 1947. Both control part of Kashmir, but claim it in full. They've also fought three wars since then; two were over Kashmir.

Tensions between the nuclear-armed neighbours escalated in the first week of the August after New Delhi revoked Jammu and Kashmir's special status. Pakistan, which claims to be a stakeholder in the Kashmir issue, reacted furiously to India's move. Islamabad downgraded diplomatic ties with New Delhi and expelled the Indian envoy. Pakistan also suspended trade and communications with New Delhi and mounted a diplomatic offensive.