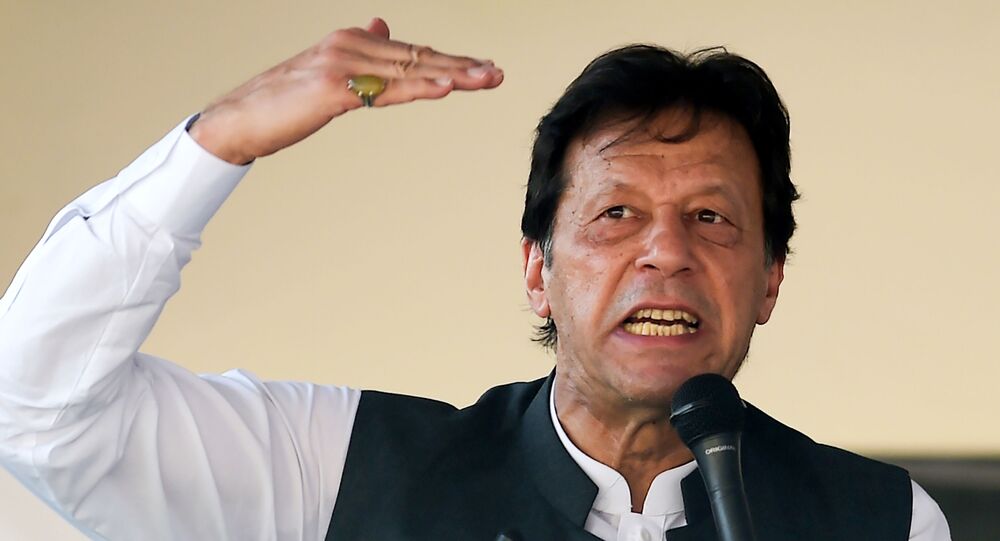 New Delhi (Sputnik): With the standoff between Pakistan and India continuing over New Delhi’s decision to scrap Jammu and Kashmir’s special quasi-autonomous status, the prime ministers of India and Pakistan are attempting to proffer their respective positions to world leaders on the sidelines of the ongoing UN General Assembly in New York.

Pakistan's Prime Minister Imran Khan, who met US President Donald Trump and other world leaders, said on Wednesday that he was “disappointed by the international community”.

Khan shared his feelings with journalists at UN Headquarters in New York, where he is participating in the ongoing 74th UN General Assembly (UNGA) session.

“I will tell the United Nations, if there is a massacre (in Kashmir), its repercussions would be far beyond Kashmir. 1.3 billion Muslims are watching this. Where is the Muslim community, where is the international community?” Khan asked while interacting with the press on Wednesday.

Acknowledging that the world community is partial to India because of its economic stature and global prominence, Pakistan's Prime Minister said: “I know why the response is lukewarm. I know why Mr. Modi is not pushed at the moment.”

“People look upon India, a market of 1.2 billion people. Sadly this is what is happening…because of its big market,” he lamented.

Both Pakistani Prime Minister Khan and Indian Prime Minister Narendra Modi, while visiting the New York to participate in the UNGA meet, have held several bilateral talks with a number of world leaders.

Khan, who has stressed that he is in New York specifically to vouch for the people of Indian-administered Kashmir following the scrapping of the region's special status by the Indian parliament recently, could not extract any assurance from either US President Donald Trump or anyone else.

Though initially, President Trump had offered to mediate between India and Pakistan on Kashmir, he has suggested  that the Indian and Pakistani prime ministers should get together and arrive at a solution.

“Well, I had a very good meeting with Prime Minister Khan. It was a long meeting and we discussed a lot.  And I think he’d like to see something happen that would be very fruitful, very peaceful.  And I think that will happen, ultimately.  I really believe that these two great gentlemen (Khan and Modi) will get together and work something... I think a lot of good things will come from that meeting,” said Trump.

Tensions between the two nuclear-armed nations escalated after India carried out an aerial strike in Balakot area inside Pakistan to destroy alleged terrorist facilities operated by Jaish-e-Mohammad (JeM) on 26 February. The attack came days after a JeM suicide bomber killed 40 security personnel in Jammu and Kashmir’s Pulwama district on 14 February.

On 27 February, Pakistan retaliated for India’s pre-dawn strike and reportedly shot down an Indian fighter jet in a dogfight; an F-16 operated by the Pakistan Air Force was also shot down, according to the Indian Air Force (IAF).

Kashmir has been a bone of contention between the India and Pakistan ever since they gained freedom from the British colonial rule in 1947. Both control part of Kashmir but claim in full. They have also fought three wars since then, two over Kashmir.