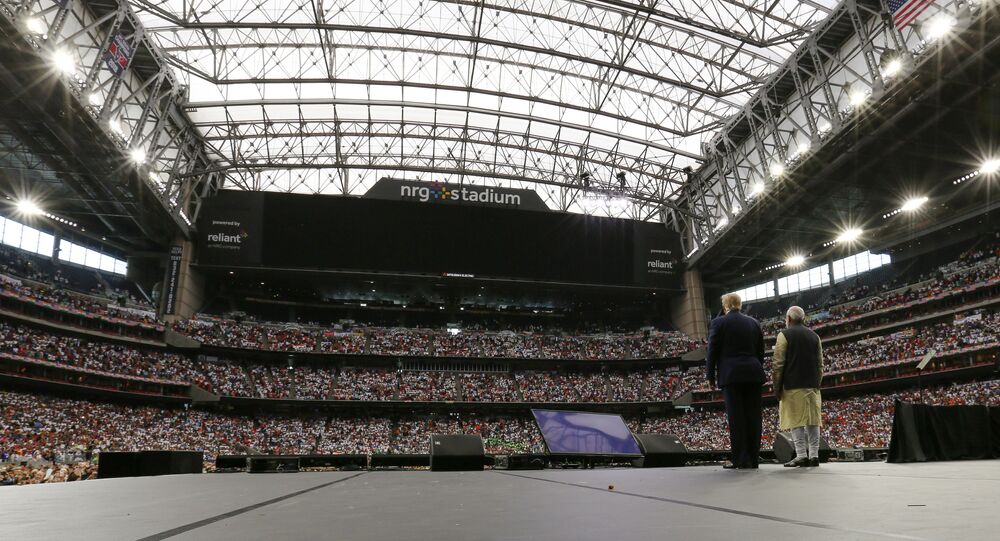 New Delhi (Sputnik): Major General Asif Ghafoor, the spokesman for Pakistan's army, was ridiculed on social media after he shared a picture of half-empty stands before the start of Indian Prime Minister Narendra Modi’s “Howdy Modi” event in the US.

The "'Howdy, Modi!' – Shared Dreams Bright Futures" event, where members of the United States' vast Indian diaspora community met Prime Minister Narendra Modi, was held on Sunday at NRG Stadium in Houston, Texas, the fourth-largest city in the United States. Modi was accompanied by US President Donald Trump; together they addressed the packed-to-capacity venue.

Taking a dig at the event, Major General Asif Ghafoor, chief spokesman of the Pakistan army’s media wing, in a since-deleted tweet showed some empty seats at NRG stadium before the event commenced and sarcastically captioned it “House Full”.

The event was attended by representatives from 48 US states and had a packed stadium; nearly 50,000 Indian-Americans were in attendance.

Electric atmosphere at the NRG arena in Houston as 50,000 strong Indian Americans wait for the historic occasion when PM @narendramodi comes on stage together with US President @realDonaldTrump at #HowdyModi. pic.twitter.com/upJj4pHphr

As the pictures and videos of the stands stared going viral on social media, netizens took a dig at Major General Ghafoor and accused him of creating a false impression of the event being a flop.

😂😂this is before MODI JI came to the event....
See what happens after he came😂😂
Asif ghafoor tweeted this pic and then deleted this pic when Modi ji came😂😂 pic.twitter.com/0G9lsTRzQ9

Asif ghafoor tweeted this and then deleted this because crowd filled up but this is not important. Why a general of Pakistan army is speaking about political matters ? Why is he blatantly indulging in political banter ? Why he doesn’t stay professional ? pic.twitter.com/Jx5ZrBiyD6

asif ghafoor sb should concentrate more on his work than being worried about what modi is doing and should leave politicians to answer modi.

The event was hosted by the Texas India Forum. The live audience in the stadium was the largest-ever gathering for an invited foreign leader visiting the US other than the Pope, according to the organisers.

It was the first time an American President had addressed such a large Indian-American audience at one place in the country.