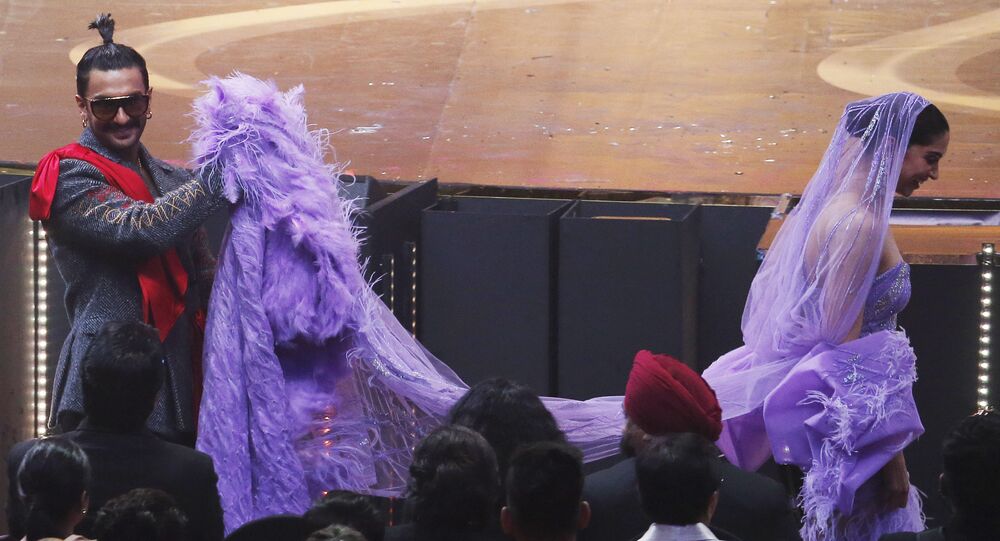 New Delhi (Sputnik): Bollywood Actress Deepika Padukone seems to know quite well how to rock red carpets and later laugh about it out loud, while sharing funny memes that creators make and trolls circulate on social networking platforms

Just as she realised that the Internet was beginning to flood with reactions to the couple’s eccentric attires, Padukone took to Instagram and shared two memes on her story section of it.

Comparing her husband to a cartoon character, Padukone shared a meme pitting Singh’s “palm ponytail” hairstyle against an animated Agnes Gru-named character from a kid's movie, Despicable Me.

The caption of the creative post read “Who did it better?” and Padukone answered the question with a GIF arrow landing in the direction of her beloved husband.

Not sparing herself as well, the 33-year old actress further shared another meme which compared her dress to that of a floor mop with the caption “close enough”.

Dressed in a purple body hugging dress, complete with a veil, Padukone walked the IIFA red carpet with her husband, who nailed an eye-catching fusion look.

Sharing pictures of the attire with her 38.8 million followers on Instagram, the actress captioned her picture "I purple you", to which Singh replied, "Baby... you're killing me".

Twitter also saw a flurry of hilarious reactions on the couple’s choice of clothes for the awards night.

deepika padukone as a feather duster - a thread pic.twitter.com/EsFZdftYso

If Attention seeking is an art give this man @RanveerOfficial an Oscar pic.twitter.com/fHdjAjmE5Z

Following his wife’s footsteps, Singh also announced at the IIFA that he was finally getting “waxified” at the iconic Madame Tussauds museum in London.