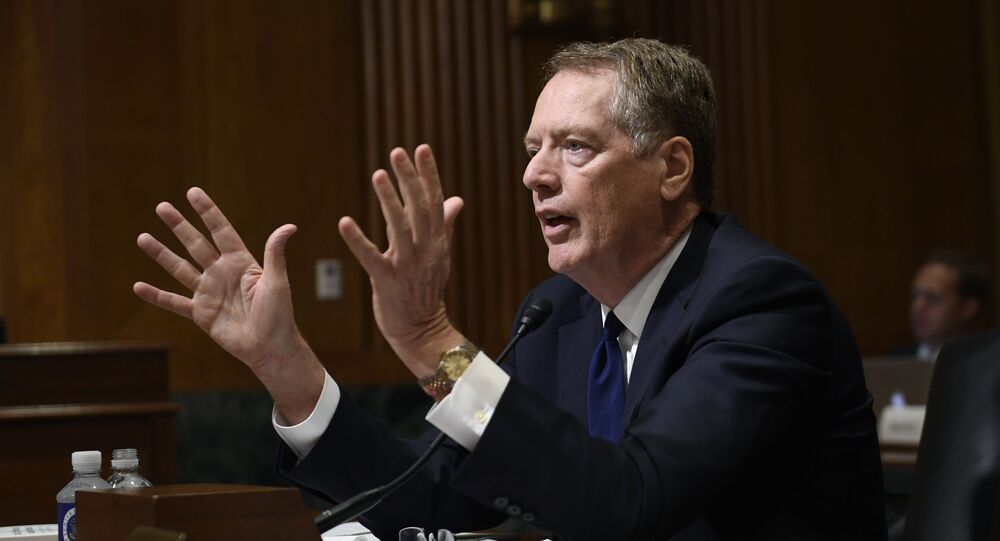 New Delhi (Sputnik): Trade relations between India and the United States have taken a hit, first when Washington suspended privileges to New Delhi from its Generalised System of Preferences (GSP) and later, when India hit back with tariff hikes on 28 specified imports from America beginning from June this year.

India has been the biggest beneficiary of the 43-year-old GSP, which gave US market access to less developed economies.

Forty-four US Congressmen have asked US Trade Representative Robert Lighthizer to reinstate the GSP status to India as it would give “improved market access for US exports to India and imports from India.”

“Just as US industries are harmed by lack of fair and reciprocal access to India’s market, American companies and workers are also harmed by new tariffs due to GSP termination. The costs are real for our constituents and growing every day,” said the Congressmen in a letter to Ambassador Lighthizer on Tuesday (17 September).

44 members of the 'Congress of the United States' in a letter to US Trade Representative Robert Lighthizer: We are encouraged to see continued engagement between the administration & the newly elected govt of India that assumed office in late May. pic.twitter.com/4JYeHhZZMQ

​“We urge you to continue negotiations and consider an “early harvest” to help American jobs that depend on two-way trade between the United States and India,” the letter continued.

US Secretary of State Mike Pompeo had travelled to New Delhi in June to negotiate on trade disputes, but failed to bridge the gap.

The letter by US Congressmen came days ahead of a planned meeting between Indian Prime Minister Narendra Modi and US President Donald Trump on the sidelines of the UN General Assembly in New York.

Indian External Affairs Minister Dr. Subrahmanyan Jaishankar expressed optimism that the differences would be sorted out in due course of time.

“My expectation is that some of the sharper edges that many of you seem to have picked up, they would be addressed in some forms in the not too distant future,” Dr. Jaishankar told mediapersons on Tuesday (17 September) in New Delhi.

“I have always been optimistic that the time will come when after a lot of these exchanges, mostly at the bureaucratic level, there would be an effort to take it to a higher level then sit down and see where we can find a common ground where this give and take and find ways by which it works for both of us,” he said.

Besides the bilateral meeting, Trump will also share the stage with Modi at a meeting of Indian-born Americans on Sunday (22 September) in Houston, Texas, named “Howdy, Modi!” It would also be the first time an American President would be addressing such a huge Indian-American audience at one place in the country.

India, US to Resume Talks on Trade Tariffs in Coming Days - Reports