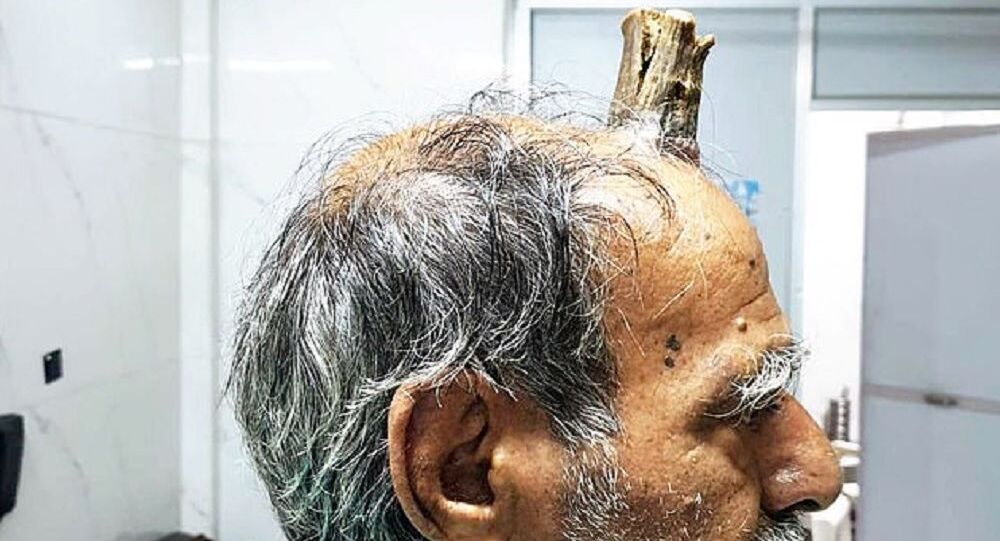 New Delhi (Sputnik): In a bizarre medical case, surgeons in the Indian state of Madhya Pradesh spend hours removing a four-inch-long "Devil’s horn" from the head of a 74-year-old patient, a report said.

Shyam Lal Yadav, a farmer by occupation, was brought into a hospital in the city of Sagar in Madhya Pradesh state ten days ago to undergo an operation to remove the unicorn-like horn that he said had started growing on his skull about five years ago after he had bumped his head.

Initially, Shyam Lal said he sought the help of his barber to keep the unique "horn" under control and ignored its growth. But when it started becoming hard and continued growing, he decided to go to the hospital, the Daily Star reported.

On examination, neurosurgeons at Sagar city's Bhagyoday Tirth Hospital called it a "Sebaceous Horn" which is composed of Keratin, a fibrous structural protein also found in toenails and human hair.

Dr Vishal Gajbhiye, one of the surgeons involved in the operation to remove the "Devil's Horn", said: "The patient had hurt his head after which a lump started growing. Initially, he ignored it, as it did not cause any discomfort."

"But when the lump hardened and started growing further, he approached the hospital at Sagar," Dr Gajbhiye said, adding that the "horn" was removed by using a sterilised razor and followed up with skin grafting.

The surgeon said the wound had healed now and the patient is recovering in the hospital but added that "the underlying condition" still needs further treatment.

Treatments to stop the horn from growing could include surgery, radiation therapy and chemotherapy.

The reason behind the growth of the horns is unknown so far, but it is believed that exposure to radiation or sunlight could be one of the contributing factors.