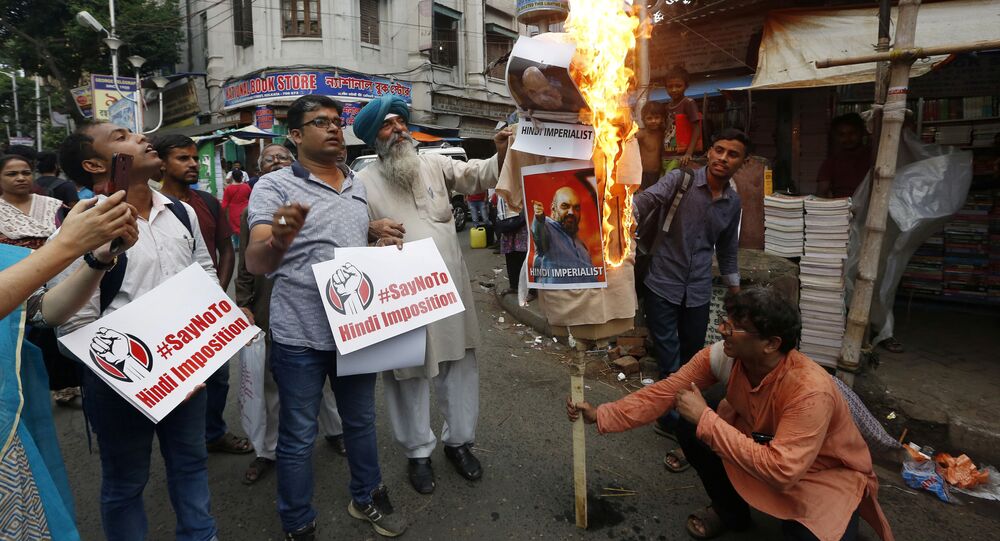 New Delhi (Sputnik): India’s federal Home Minister’s call to adopt Hindi as the national language has angered the political leaders of southern states; some have even threatened to launch agitation against the imposition of Hindi. Shah, while addressing the Hindi Day celebrations on 14 September, suggested accepting Hindi as the national language.

Pinarayi Vijayan, the Chief Minister of southern state of Kerala, slammed the move to adopt Hindii nationwide, calling it an “attempt to create a controversy in the name of language and divert public attention away from major issues facing the country”. While Hindi is the nation's most popular language, with 422 million native speakers, there are 22 official languages in the country of over 1.3 billion people.

“While unity in diversity is India's defining trait, a common language is needed as a culturally unifying factor. Even Gandhi ji (Mahatma Gandhi) and Sardar Patel (Sardar Vallabhai Pattel), who forged a united India, appealed to people to accept Hindi as the national language,” said Shah.

​Several opposition parties and leaders have slammed Shah for stirring up a controversy on a sensitive issue.

“We should not stir up controversies on an emotive and sensitive issue which has been settled by the maturity of India’s Constitution-makers,” said Anand Sharma spokesperson of the opposition Congress Party.

Leader of the opposition Dravida Munnetra Kazhagam or DMK in southern Tamil Nadu M.K. Stalin and actor-turned-politician Kamal Hassan have warned of agitation against the move.

“The DMK is ready for any sacrifice to stop the imposition of Hindi on us,” said M.K. Stalin, leader of DMK. Stalin asked his cadres to be ready for the next anti-Hindi agitation.

“We respect all languages. But our mother language will always be Tamil. Jallikkattu (agitation against traditional bull race) was just a protest. The battle for all languages will be exponentially bigger than that. India or Tamil Nadu do not need or deserve such a battle,” warned Kamal Hassan in a video message on Monday.

Now you are constrained to prove to us that India will continue to be a free country.

You must consult the people before you make a new law or a new scheme. pic.twitter.com/u0De38bzk0

​The ruling party of Tamil Nadu, Anna Dravida Munnetra Kazhagam (AIADMK), which is an ally of the ruling nationalist Bharatiya Janata Party (BJP) has also come out against any move to impose Hindi.

“If the Centre imposes Hindi unilaterally, there will only be (adverse) reaction and no support, not only in Tamil Nadu but also in states like Bengal, Karnataka and Andhra Pradesh,” warned Culture Minister of Tamil Nadu K. Pandiarajan.

Tamil Nadu witnessed mass protests, riots and political movements against the imposition of Hindi, both before and after India’s independence in 1947. DMK’s founder Anna Durai spearheaded the anti-Hindi agitation in Tamil Nadu in the 1960s.

On the other hand, federal Minister for Chemicals and Fertilisers D.V. Sadananda Gowda, a senior leader of BJP from Karnataka, countered the critics, saying Hindi is a unifying language.

Union Minister DV Sadananda Gowda: Hindi is a unifying language, it doesn't mean it will boss over other regional languages of country, the 3 languages formula is accepted by us all. Even Prime Minister spoke on the floor of the House that all regional languages will be respected pic.twitter.com/hpOF9hP0VM