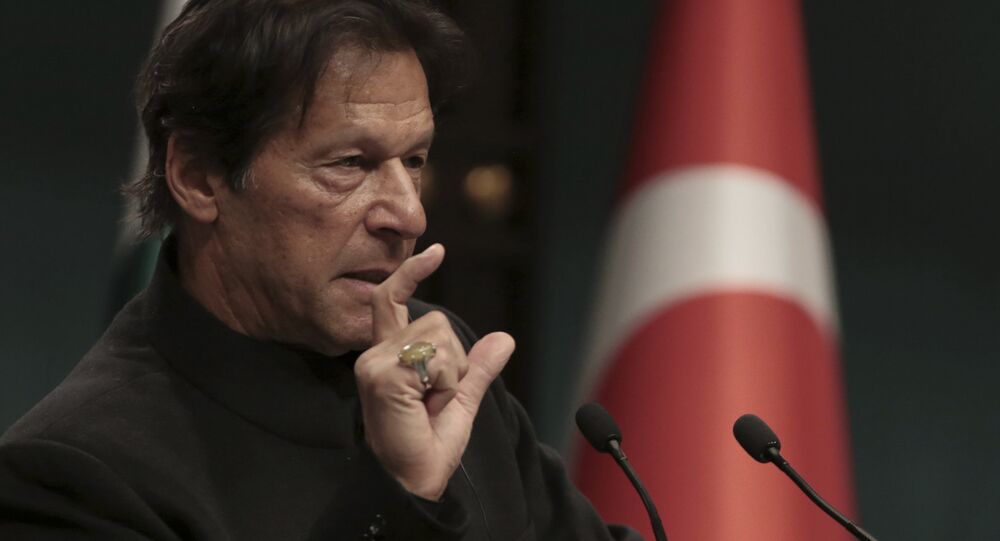 New Delhi (Sputnik): In an exclusive interview with RT, Pakistan's Prime Minister Imran Khan said that his country had trained the Mujahideen or guerillas for suicide missions (jihad) in the 1980s against the Soviet Union when it occupied Afghanistan.

Khan told RT on Friday that it was unfair to now blame Pakistan for the failure of the Americans in their peace mission in the war-torn country.

"These people were trained by Pakistan, funded by the CIA of United States and now a decade later when the Americans come into Afghanistan….The same groups who are all in Pakistan are supposed to say that now because Americans are there, it is no longer jihad, it is terrorism", he rued.

Pakistani PM Imran Khan: In 80s we were training these Mujahideen people to do jihad against Soviet when they occupied Afghanistan. So,these people were trained by Pakistan, funded by US's CIA & now a decade later when the Americans come into Afghanistan... (File pic) (1/3) pic.twitter.com/34MQNcnA3X

Pak PM:The same groups who are all in Pakistan are supposed to say that now because Americans are there it is no longer jihad its terrorism. It was a big contradiction&I strongly felt that Pakistan should have been neutral because by joining in,these groups turned against us(2/3) https://t.co/gVjDtcxB1T

The Pakistani PM admitted his country has lost 70,000 people and over 100 billion US dollars to the economy. “In the end, we were blamed for the Americans not succeeding in Afghanistan. I felt it was very unfair on Pakistan", said Imran Khan.

Pakistani PM Imran Khan: We lost 70,000 people, we lost over a 100 billion dollars to the economy. In the end, we were blamed for the Americans not succeeding in Afghanistan. I felt it was very unfair on Pakistan. (3/3)

In a statement, Afghanistan's envoy to the United States Roya Rahmani said, “Afghanistan’s stability is frequently threatened by Pakistan-based, sanctioned and supported militant and terrorist groups”.

In an abrupt announcement through a tweet on 8 September, President Donald Trump cancelled his planned secret meeting with President Ashraf Ghani of Afghanistan and Taliban representatives at Camp David.

“What kind of people would kill so many in order to seemingly strengthen their bargaining position? They didn’t, they only made it worse! If they cannot agree to a ceasefire during these very important peace talks, and would even kill 12 innocent people, then they probably don’t have the power to negotiate a meaningful agreement anyway. How many more decades are they willing to fight?” read a series of tweets by President Trump.

The US president also announced plans to withdraw 14,000 US troops from Afghanistan, where they have been deployed ever since the American-led campaign overthrew the Taliban in 2001.

Afghan officials are concerned about the move as they fear the country could return to a new civil war resulting in the resurgence of the Taliban, who could allow like-minded international terror groups to take refuge in Afghanistan.

Imran Khan’s despair comes at a time when his country has been dealing with a tense stuation against India, after New Delhi’s decision to strip Jammu and Kashmir of its special status.