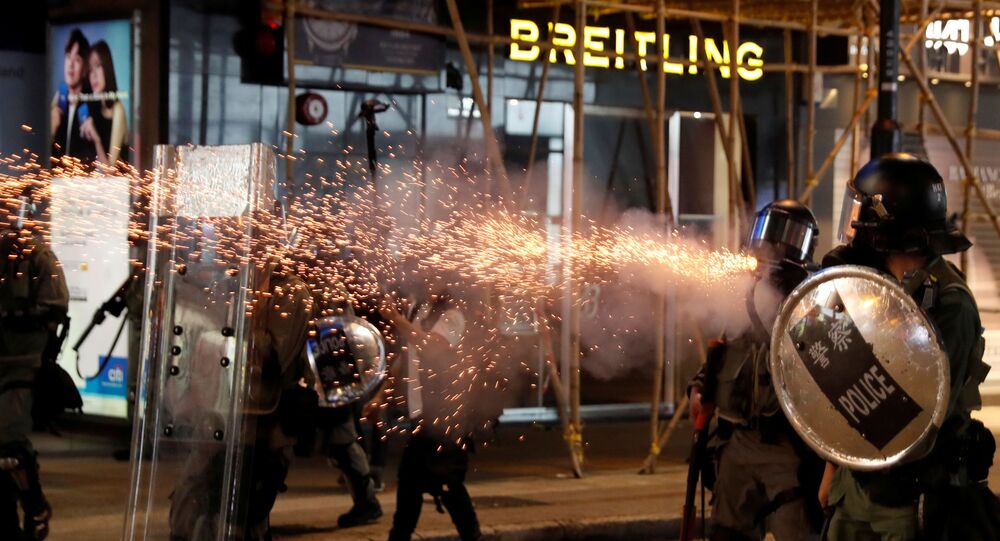 Beijing was quick to call out Washington’s double standards following the introduction of a bipartisan bill in the US Congress that seeks to halt the US export of “tear gas and other non-lethal crowd control equipment” to Hong Kong amid continued demonstrations.

“I am deeply concerned that American-made police equipment is being used to violently crack down on peaceful protesters in Hong Kong,” McGovern, who also chairs the Congressional-Executive Commission on China, said in a Wednesday press release concerning the bill.

If passed, the PROTECT Hong Kong Act would effectively suspend relevant US companies’ export licenses to Hong Kong 30 days after its enactment. One of those companies would be the Pennsylvania-based Nonlethal Technologies, which recently gained public attention following a September 5 report by BuzzFeed News.

According to the outlet, employees at the facility are expected to work from 6:30 a.m. to 5 p.m. and receive a starting pay of only $9.50 an hour. However, not many see an increase in pay, being that most people do not last long in the questionable work conditions. The exposé detailed that many workers have quit or had to go on leave due to rashes and other reactions to the chemicals they are exposed to on a daily basis.

“My face was so swollen that my left eye was completely shut. And then my right one completely shut. I looked like a totally different person,” claimed one former worker. Despite wearing protective gear, he said that some material still got under his mask.

Though the company is not the only one selling tear gas and other crowd control equipment to Hong Kong, hundreds of the canisters of CS, or chlorobenzalmalononitrile, exported by Nonlethal Technologies have been seen on the city’s streets following demonstrations.

However, congressional representatives did not detail the dangers US workers are exposed during the creation of this equipmentment.

The proposed bipartisan bill does highlight that the United Nations High Commissioner for Human Rights and other humanitarian and human rights organizations have called for investigations into the Hong Kong Police Force and other government organizations in the semi-autonomous city.

Though the Hong Kong government and Chief Executive Carrie Lam have fully withdrawn the extradition bill that sparked demonstrations in the city, protesters have made it clear that they want a third-party investigation into the alleged brutality committed by members of the Hong Kong Police Force.

A sarcastic response to the PROTECT Hong Kong Act was issued by Chinese Foreign Ministry spokeswoman Hua Chunying during a Wednesday press briefing in Beijing.

“If violent crimes similar to those in Hong Kong take place in the US, would those American Congress people maintain the same level of ‘benevolence’? I wonder if the US congressmen want to use the anti-riot equipment inside the US for their own use?” Hua said, as reported by the South China Morning Post.

Hua continued that the issues in Hong Kong are internal affairs and went on to cite the US’ own domestic issues, such as last month’s police clashes with opposing demonstrators in Portland, Oregon.

Similar to Hong Kong protesters who were accused by Beijing spokesman Yang Guang of showing “signs of terrorism,” the left-wing organizations known as Antifa have been deemed an “organization of terror” by US President Donald Trump and are classified as domestic terrorists by the FBI and Department of Homeland Security.

“I want to point out that just because of the connivance and support of some politicians in the US, the anti-China activists who are disrupting Hong Kong can be so unscrupulous and fearless,” Hua said Wednesday, reiterating her view of Washington’s “sheer hypocrisy and double standards.”