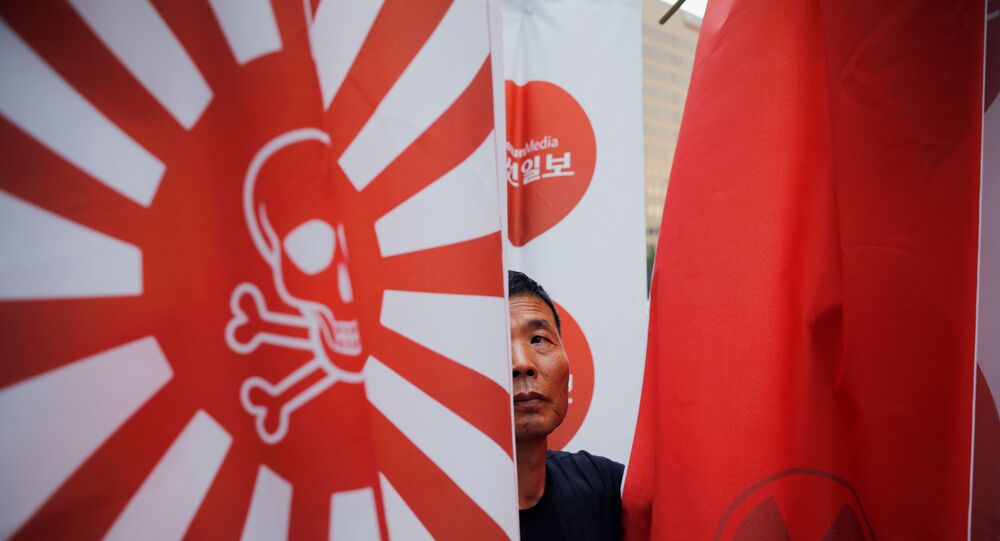 TOKYO (Sputnik) - Seoul has filed a complaint against Japan at the World Trade Organisation (WTO) over Tokyo's decision to introduce export tariffs on materials much needed by South Korean tech manufacturers in what they believe to be a tit-for-tat move in response to a demand for wartime reparations, Trade Minister Yoo Myung-hee said on Wednesday.

"South Korea decided to file a complaint with the WTO on Japan's export curbs against the three vital materials for chips and displays. [Japan's] measure is a discriminatory act directly targeting South Korea, and it was politically motivated following our court rulings on the forced labour [of Korean workers during Japan's colonial rule]", Yoo said at a press briefing, as cited by the Yonhap news agency.

She added that Seoul saw in Japan's actions a violation of Article 11 of the General Agreement on Tariffs and Trade (GATT), which bans regulations on export volumes unless the products have a serious impact on national security.

Under WTO regulations, if the two parties fail to settle the dispute within 60 days through consultations, the organization will establish a panel to adjudicate on the dispute.

In early July, Japan introduced restrictions on exports of three high-tech materials — fluorinated polyimides, photoresist and hydrogen fluoride — which are vital to the manufacturing of semiconductors and displays developed by South Korean tech companies. Later in August, Tokyo removed Seoul from its list of trading partners with preferential rights.

The move came shortly after a South Korean court ruled that Japanese companies pay reparations to former Korean workers who were forced into labor during World War II by Japan, a colonial power at the time.

Tokyo's official position regarding the reparations is that the bilateral 1965 Treaty on Basic Relations had fully resolved the matter. From Tokyo's point of view, the South Korean court rulings go against previous agreements between the two countries.