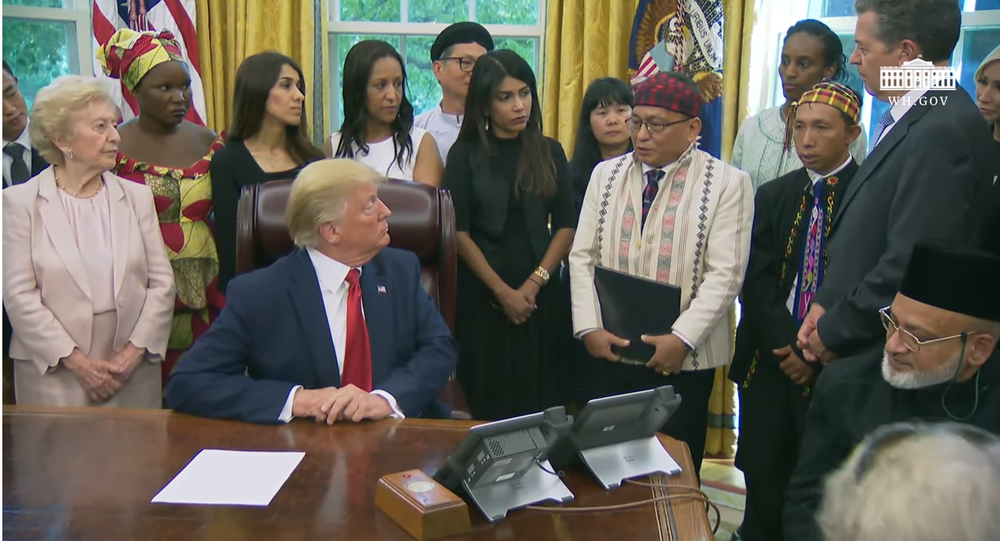 New Delhi (Sputnik): The Myanmar army has dropped criminal charges against a religious leader who complained to US President Donald Trump about the difficulties that Christians face in the Buddhist majority nation.

Lieutenant Colonel Than Htike has withdrawn his legal complaint against the Rev Dr. Hkalam Samson, president of the Kachin Baptist Convention (KBC), who asked US President Donald Trump to support Myanmar’s transition to "genuine democracy and federalism" at the White House earlier this summer, local media reported.

The group is based in Kachin State and represents Myanmar’s mostly Christian Kachin ethnic group.

Myanmar's military spokesperson Brigadier General Zaw Min Tun denied there was any external pressure behind the decision to drop the case.

“We withdraw the case voluntarily because it is what we should do,” he said, as cited by Reuters.

On 6 September, the US expressed deep concern over a criminal complaint against Samson "in relation to his remarks about religious freedom and the rights of members of ethnic and religious minority groups in Burma during his recent meeting in Washington."

"The Lieutenant Colonel’s criminal complaint against Reverend Samson seeks to unduly limit his freedom of expression and potentially could disrupt his critical work on behalf of tens of thousands of internally displaced people," the US state department said, adding that the arrest of Reverend Samson on the basis of his protected speech would be "deeply troubling."

Speaking with The Irrawaddy on Monday, Samson said he welcomed the military’s decision to withdraw the complaint against him, while saying that there had been no negotiations between the KBC and the military.