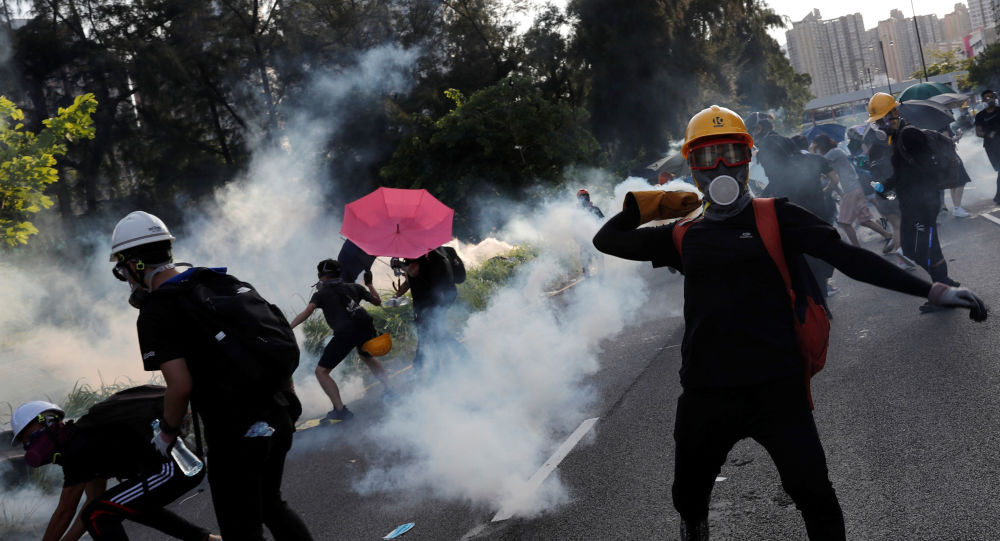 BEIJING (Sputnik) - Hong Kong police said on Monday it had resorted to using tear gas to disperse violent protesters, who were hurling stones at law enforcement officers in the Tin Shui Wai district.

Police tweeted that a large group of protesters gathered around the Tin Shui Wai Police Station and threw stones at policemen thus "posing a serious safety threat to members of the public at scene."

The law enforcement agency urged the protesters to leave the area immediately, condemned the violence and warned residents of nearby houses to keep their windows closed and remain indoors.

After repeated and futile warnings, in face of the situation, anti-riot Police officers have deployed tear gas and minimum force to disperse protestors.

The Police appeal to everyone in the area to leave immediately.

​On Monday morning, protesters blocked roads and rail traffic in a bid to prevent the residents from getting to work in the business districts of the city. The protests affected the operations of Hong Kong International Airport, in which only one runway remains functional.

© REUTERS / TYRONE SIU
A protester reacts after throwing a tear gas canister back to the police, during a protest against police violence, near China's Liaison Office, in Hong Kong, China July 28, 2019

Mass rallies erupted in Hong Kong in early June as the authorities were considering adopting a bill that would allow the autonomous Chinese city to extradite suspects to jurisdictions with which it did not have an extradition agreement, including mainland China. Pressured by the protests, the government indefinitely suspended the bill and Hong Kong Chief Executive Carrie Lam issued a public apology. In spite of this, the protesters continue to demand the complete withdrawal of the extradition amendments.

Pro-government groups have criticised the rallies, claiming that such large-scale disruption in all areas of business, from restaurants to aviation, will cause great damage to Hong Kong's international reputation, which used to boast its stability and world-class service. On Saturday, thousands gathered in Victoria Park to denounce the protests and express support for police.