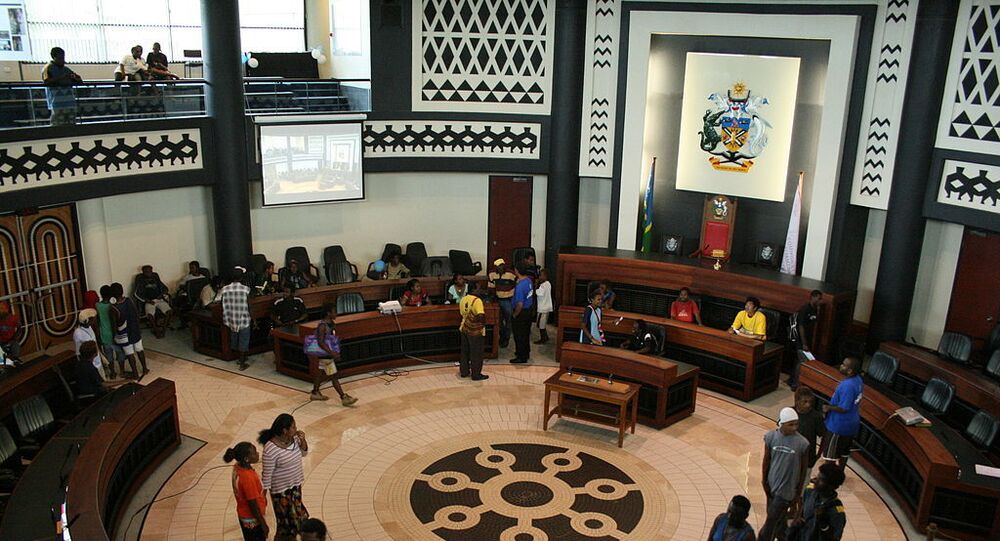 The Oceanic country of the Solomon Islands might soon switch its recognition of the legitimate government of China from Taipei to Beijing, leaving the autonomous island with just 16 countries on its side of the dispute. A pro-Beijing Solomon Islands is likely to rile strategists in Canberra and Washington, too.

A ministerial task force formed by Solomon Islands Prime Minister Manasseh Sogavare earlier this year to weigh the benefits of changing the country’s diplomatic recognition of the Chinese government from Taipei to Beijing was “clearly leaning toward Beijing,” an unnamed Solomonian lawmaker told Reuters for a September 1 story.

However, the Chinese Foreign Ministry has so far played it cool, with ministry spokesperson Geng Shuang telling Reuters only that China was willing to have diplomatic relations with any country that respects the One China Policy.

Since 1949, Beijing and Taipei have dueled across the world diplomatic arena for recognition as the sole legitimate government of China, both following the One China Policy.

When the communist Red Army defeated the republican nationalists and conquered all of the mainland in 1949, Communist Party Chairman Mao Zedong established the People’s Republic of China in Beijing that October. However, the Republic of China survived on Taiwan, continuing to claim it was the only legitimate Chinese government and denouncing the communist mainland as illegitimate rebels. Likewise, Beijing denounces the Taipei government as rebels. The two governments refuse to do business with countries that recognize the other side as the Chinese government.

For decades much of the world continued to recognize the republican government, as they had since 1912, but by 1979 the United States had decided to recognize Beijing, turning the tide against Taipei. However, most of the world’s nations have continued to have informal relations with Taiwan, including the US, which continues to supply the Republic of China Armed Forces with second-rate military hardware with which to defend itself from Beijing.

The most recent countries to switch their recognition were Burkina Faso, the Dominican Republic and El Salvador, all in 2018. If the Solomon Islands were to switch recognition, it would leave just 16 nations acknowledging Taipei as the seat of the Chinese government.

“There’s a certain thinking with the current government and executive to switch,” opposition lawmaker Peter Kenilorea told Reuters. “The amount of money that has already been spent by the government on this is quite telling.”

“It doesn’t take much imagination to work out what the task force will recommend,” Kenilorea said. The foreign relations committee he chairs will be tasked with reviewing those recommendations, which could come as early as this week.

China is already the Solomon Islands’ largest trading partner, buying $456 million in goods from the island nations in 2017. The islands’ largest exports are rough wood, processed fish, palm oil and copra, according to the UN International Trade Statistics Database.

Last month, eight ministers, including the prime minister’s private secretary, paid a visit to Beijing, Reuters noted, following a visit by Chinese Foreign Ministry officials to Honaria. The Island Sun noted in July that the Solomon Islands-China Friendship Association, which represents Beijing’s interests in the island nation, had been informed about possible Chinese investments at the Belt and Road Initiative forum in Xining.

“The window of opportunity for meaningful engagement is closing fast,” Beijing diplomats told their Solomonian counterparts in late July, according to the Island Sun, a Honaria-based daily.

Positioned off the southeastern coast of Papua New Guinea, the nation of 600,000 presents a commanding position over Melanesia and the Coral Sea just a thousand miles from Australia. Indeed, when the Japanese Empire occupied the island chain during World War II, the United States fought a hard battle to dislodge them from Guadalcanal, the principal island in the  Solomon chain, where Honaria is located.

Reports emerged last year that Beijing was scouting nearby Vanuatu for a new naval base location, but both countries strongly denied the claims, first made by Australia’s Fairfax Media, as “baseless rumors.” However, Beijing did finance the construction of a $90 million wharf on Vanuatu’s Santo Island that was completed in 2018.

That report only fanned the flames of Sinophobia in Australia, which has already set aside over $66 billion for a dramatic naval expansion to meet the People’s Liberation Army Navy on the Pacific high seas.

When three Chinese vessels sailed into Sydney harbor in early June 2018, Australian media screamed about Chinese imperialism, claiming that Prime Minister Scott Morrison’s government had been taken by surprise by their arrival. However, when Morrison told reporters it had been scheduled well in advance, he did so during a visit to Honaria, where he was offering the Solomonian government a $173 million aid package in an effort to woo them away from Beijing, Sputnik reported at the time.