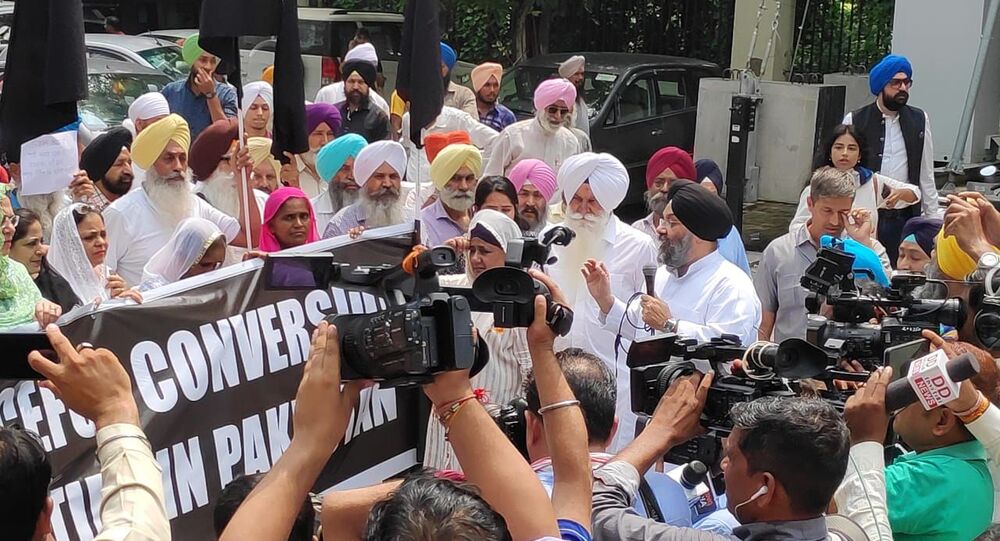 New Delhi (Sputnik): Outraged by reports of abductions, forcible conversions, and the marriage of a Sikh girl to a Muslim man in Pakistan, a number of Sikhs staged a protest outside the Pakistani High Commission in New Delhi on Monday demanding protection for minorities in Pakistan.

The protesters, including women, were agitated about the casual approach of Pakistani authorities over the plight of an aggrieved Sikh family and minorities living in their country.

Carrying banners reading messages:"Stop Forceful Conversion of Minorities in Pakistan", the protestors demanded protection for the Sikh community against atrocities being meted out to them in Pakistan.

The protestors wanted to submit a memorandum to the Pakistan High Commission when they were stopped by security forces at the barricades. A strong security presence deployed near the High Commission, however, prevented them from doing so.

The protest came days after recent reports about a teenage Sikh girl, Jagjit Kaur, in the Pakistani town of Nankana Sahib. The girl, who has been now been moved to a detention centre instead of with her family, was reportedly abducted, forced to convert to Islam, and marry a Muslim individual.

Irked by being stopped from submitting the memorandum, the protestors became agitated and burned an effigy amid sloganeering to highlight the issue and press for their demand to provide safety and security to minorities in Pakistan.

On Sunday, Indian External Affairs Ministry spokesperson Raveesh Kumar tweeted that civil society and the people of India have strongly condemned the forced abduction, conversion, and marriage of Sikh girls in Pakistan.

The civil society & the people of India have strongly condemned the recent deplorable incidents of forced abduction, conversion & marriage of two Sikh girls in Pakistan. We have reflected these strong concerns with Pakistan and have asked for immediate remedial action.

Jagjit’s incident came to light after her family released a video calling upon Pakistan's Prime Minister Imran Khan to intervene in the matter and rescue the girl. The family had alleged that Jagjit was forcibly converted to Islam after being told that her brothers and father would be killed if she refused.

Shocking incident of a Sikh girl being kidnapped & forced to convert to Islam in Nankana Sahib, Pakistan. Call upon @ImranKhanPTI to take firm and immediate action against the perpetrators. Request @DrSJaishankar to strongly take up the issue with his counterpart at the earliest. pic.twitter.com/hpHvD9kkEJ

The video clip went viral in India leading to a huge uproar. Outraged at the alleged abduction, prominent Sikh politicians and social media users slammed the Pakistani authorities for failing to protect the country's Sikh minority.

According to Pakistani government statistics, minorities make up around 3.72% of the country's population. According to a 2010 survey conducted by an NGO, namely Sikh Resource and Study Centre (SRSC), the Sikh community in Pakistan was estimated at around 50,000.