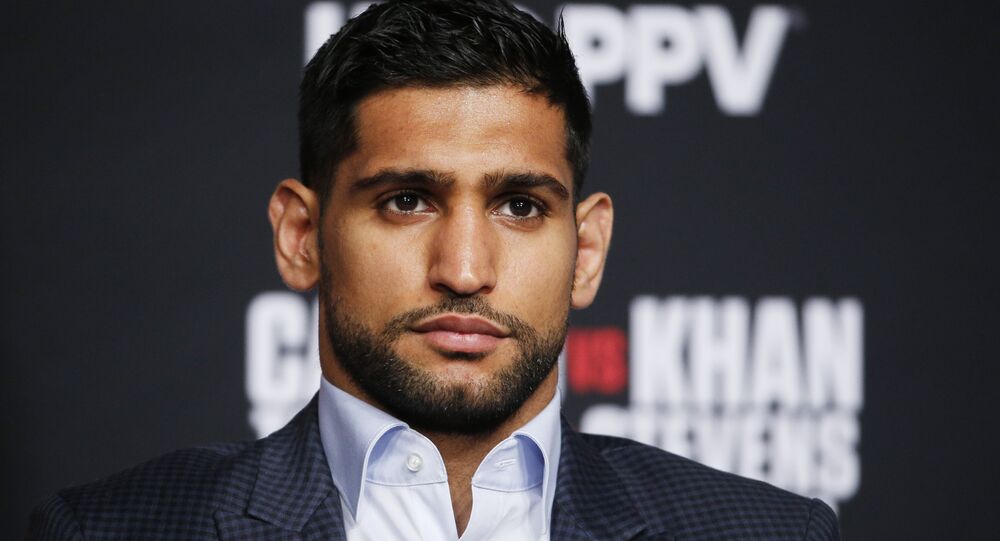 New Delhi (Sputnik): Pakistani-origin British boxer Amir Khan’s plan to visit the Pakistani side of the Line of Control (LoC) to spread “awareness” about the situation in Kashmir has caused anger among Indian Twitter users.

The former British boxing light-welterweight world champion took to Twitter to announce plans to visit the Pakistani side of the LoC to call for peace after the Indian government’s decision to revoke the special status of Jammu and Kashmir and divide the state into federally administered territories - Jammu and Kashmir, and Ladakh.

Khan has expressed his gratitude toward the Pakistan Army for organising his visit to the country.

I’m visiting Pakistan, Line of Control( LOC), to make my voice heard, bring greater awareness to the terrible situation in Kashmir and call for peace @UN charter Thank you @officialdgispr for the opportunity

Former Pakistani cricketer Javed Miandad also joined the league and hailed the decision by sports celebrities to speak up against the Indian government’s decision on Kashmir.

I’m with other legends of sports to be visiting Line of Control( LOC), to make my voice heard, bring greater awareness to the terrible situation in Kashmir and call for peace @UN charter. pic.twitter.com/zuRER8W2ll

Hitting out at Khan, Twitter users called him “opportunist” and accused him of using the Kashmir issue to gain fame.

Amir, you should quit taking advantage of publicity. You ignored all my pleas to you on Kashmir. Why are you suddenly interested? Cause it brings you fame? The Kashmiris are not just there for that

Can't you see that only Pakistanis are appreciating your step. What do you think what will you gain grom this, only some cheap publicity in Pakistan and defame for India.

Think about something bigger than selfishness.#NationFirst

​Others asked him to voice his opinion on crimes against the Baloch people.

Yes make sure u report the atrocities on the Pakistani side of kashmir and in balochistan. But try not to take footage from palestine and other places and say its from the Indian side of Kashmir like so many other pakistanis. 🤦‍♂️

Great. Please solve the problems in Pakistan Occupied Kashmir. They really are in pain.

raise some voice also against terrorists like hafiz saeed, azhar masood because of which pakistan is in FATF 'greylist'.

A section of netizens slammed him for getting clicked with Bollywood celebrities on one hand and on the other hand sending the anti-India message.

Is Antony Joshua going with you or is he staying at Home keeping companies . last week was chilling with Indian actors now he’s patriotic and concerned about Kashmiris give over you 🔔end

Others, however, supported the boxer.

Great to see you are coming for a cause it proves you are brave, stand for oppressed people and humanity. Plz #Kashmir with all your tweets so everyone of us can see your tweets and the world. #Kashmir

Well done Amir.I hope that you can document the situation to bring awareness to people around the world.Indian atrocities should be put to a stop. If the countries and organisations such as the UN do not intervene and actually put an end to it then it leaves us with no choice.🇵🇰

Dear @amirkingkhan we are sending you much respect, love and best wishes from Birmingham, UK.
You proved that you are true Ambassador of Pakistan and Humanity.
we support your mission in this great cause of Kashmir. Thanks, @peaceforchange for your valuable support.