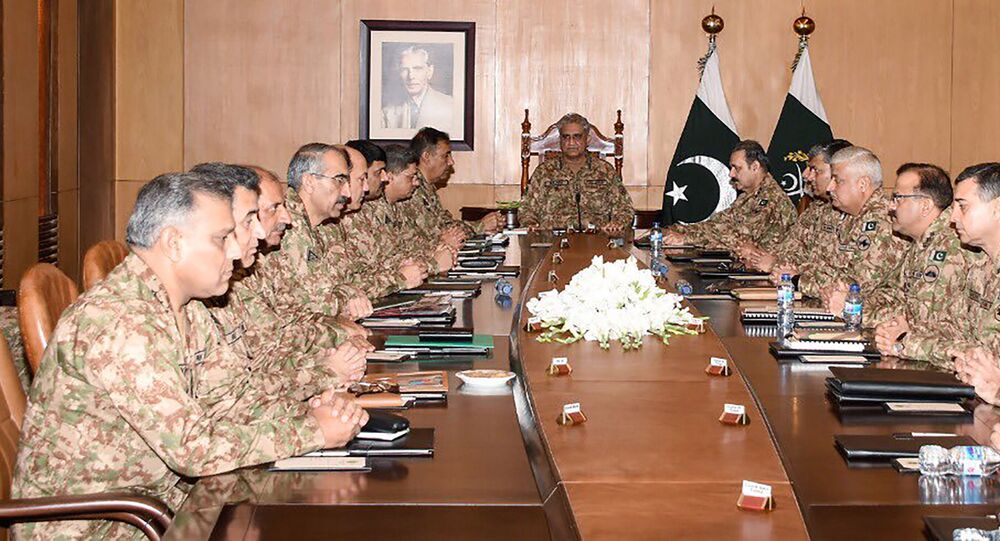 New Delhi (Sputnik): General Bajwa has been a strong advocate for clean governance in Pakistan, which gels with the vision of the Imran Khan government. It’s been evident in some of his decisions including the sentencing of a three-star lieutenant general to 14 years of rigorous imprisonment for sharing secrets with India.

Pakistan Prime Minister Imran Khan has granted a three-year extension to his Army chief General Qamar Javed Bajwa as the country is faced with an unprecedented situation with neighbouring India over Kashmir.

The notification issued by the Prime Minister's Office on Monday said the decision has been taken "in view of the regional security environment".

"General Qamar Jawed Bajwa is appointed Chief of Army Staff (COAS) for another three years from the date of completion of current tenure," the notification reads.

Government has granted an extension of three years in the tenure of Chief of Army Staff General Qamar Javed Bajwa. pic.twitter.com/oSCImgBFKl

A career infantry officer belonging to the Baloch Regiment, General Bajwa was appointed as the COAS in November 2016 for three years by the then prime minister Nawaz Sharif.

General Bajwa had commanded the 10 Corps, responsible for the area along the Line of Control (LoC).

Last week, extending firm support to the Kashmiri people, Gen. Bajwa said the Pakistan Army would go to "any extent" to fulfil our obligations in this regard".

Tensions escalated earlier this month when the Indian-administered part of the majority-Muslim region, known as Jammu and Kashmir, had its special status within the Constitution revoked by the Indian government on 5 August, placing it under tighter Central-government control.

Gen Bajwa has acquired a reputation for being a strong advocate of clean governance in Pakistan, which gels with the vision of the Imran Khan government. 'It's been evident in some of the decisions taken by Gen Bajwa in May this year including sentencing a three-star lieutenant general to 14 years of rigorous imprisonment and a death sentence to Brigadier rank officer for sharing secrets with a foreign agency.

Bajwa has also insulated the military from corruption allegations in the last three years.

His recent visit to the US also refreshed military relations between the two countries, a development long-missing since the US suspended $1.3 billion in aid to the economically ailing country in early 2018. It is hoped 'Bajwa's presence at the helm will also support the US in dealing with the Taliban in the Afghan peace process.