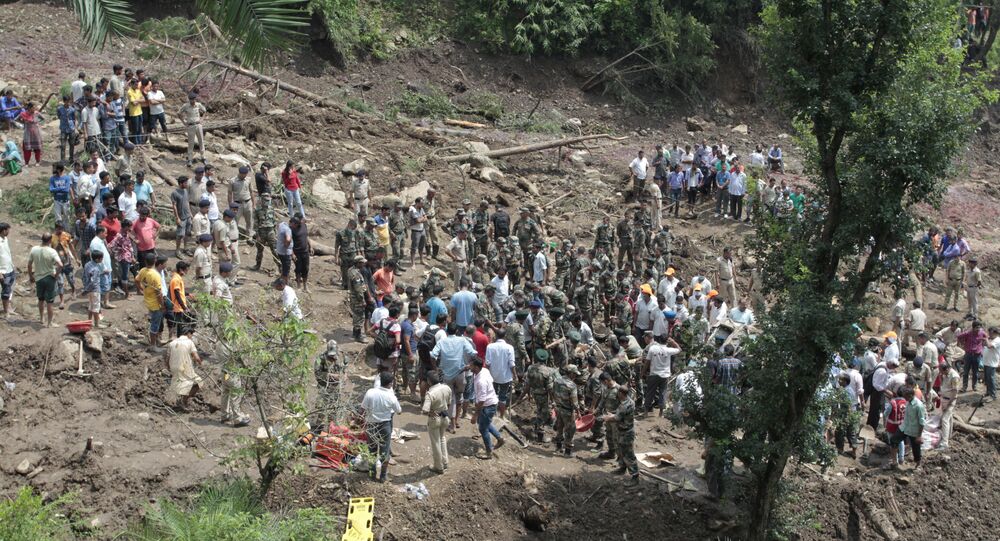 In Himachal Pradesh, at least 24 people were killed in floods and landslides. Several key roadways are blocked due to landslides. The provincial government ordered the closure of schools and colleges in several districts on Monday.

​In the neighbouring Punjab, three persons lost their lives when their house collapsed due to incessant rains. Several areas have been inundated in flood waters and the rivers through the states are at dangerously high levels. The army has been called out to help civil authorities in rescue operations and a flood alert has been sounded in the state as rain continues unabated.

​In the Himalayan state of Uttarakhand four people were killed and over 20 others are missing after a dozen houses were washed away in heavy rains and flash floods, reports the English daily Hindustan Times.

​In the national capital of Delhi, a flood alert has been sounded as the Yamuna River crossing through the city is above the warning level.

Delhi: Water level of Yamuna River recorded at 204.70 meters today (the warning level is at 204.50 meters), after more than 8 lakh cusecs of water released from Hathni Kund barrage. Delhi Govt has issued orders for evacuation, Civil Defence volunteers have been deployed. pic.twitter.com/wLhJtdxQjy

​Meanwhile, in the southern state of Kerala flood waters have started receding as  the rain subsided. The state lost 113 people in the recent floods, according to State Chief Minister Pinarayi Vijayan. Several people are still missing in the region, which witnessed heavy landslides after villages were washed away. In the state's Malappuram District, ground penetrating radars have been requisitioned to locate the bodies of missing persons buried under mounts of mud, boulders and uprooted trees.