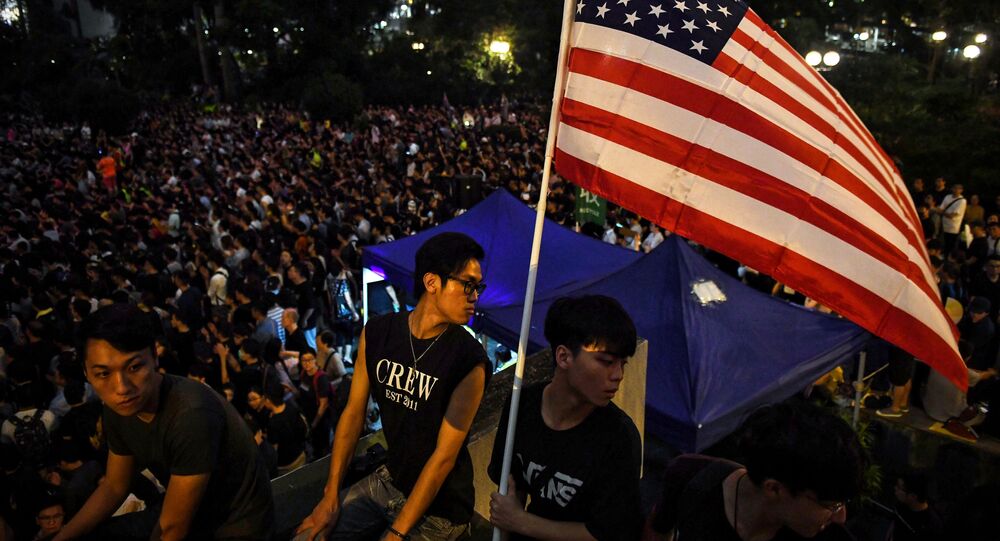 HONG KONG (Sputnik) - Claims by the Hong Kong protest organizers that law enforcement officers use excessive force against demonstrators are "unfair", the Hong Kong Police said hours after the Sunday rally finished peacefully, despite a number of small incidents.

"One of the accusations by the public meeting organizer was the abusive use of violence by Police. Police have to point out that over the past two months, violent incidents happened in various large-scale protests. The Police Force has always been exercising restraint, tolerance, and patience, striving to maintain public order and protect the safety of members of the public", the police said in a statement.

According to the law enforcement agency, "protestors neglected their violent acts and the provocation at Police" but bashed the latter for use of force, which is "unfair to Police".

They added that the police stepped in, using force proportionately, only in case of "violent acts" or illegal behavior that "endangered the safety of people at scene".

"Police all along respect people’s rights and freedom to express views and facilitate all peaceful public events. Police appeal to protestors to remain peaceful, rational and non-violent when participating in public events in order to maintain public safety and public order", the statement concluded.

On Sunday, the opposition Civil Human Rights Front organized a mass demonstration in Victoria Park. Even though the police only sanctioned the rally in Victoria Park, the protesters, despite rainy weather, soon left the park to join an unauthorized march. According to the organizers, over 1.7 million people took part in the action.

Even though the Sunday demonstration was peaceful, some protesters, who gathered near a government compound in Admiralty area in the city’s central district, shouted out insults against the police and pounded with their umbrellas on the 6.6-foot barriers installed around the Legislative Council building, albeit without taking radical action.

According to the police, the protesters also shone lasers on officers and hurled "hard objects at the Central Government Complex". The police did not react. By midnight (16:00 GMT Sunday), the demonstrators left the area.

Mass protests erupted in China's semi-autonomous Hong Kong in early June in response to a controversial bill that would allow extraditions to the mainland.

Although the local parliament eventually announced that it had suspended the bill, people continue to protest, demanding that it be withdrawn completely. At first, the rallies were peaceful but they subsequently led to violent clashes between the demonstrators and the police.